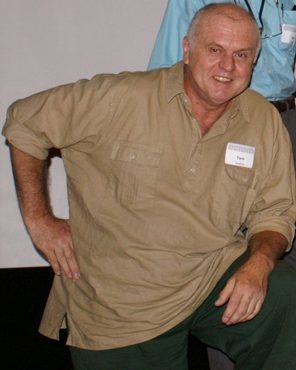 Our longtime projectionist Tom Sedlak, who died suddenly in November after a period of declining health, was probably the first person I hired to work for the Cinematheque. If it wasn’t Tom, then it was my other veteran projectionist, Les Vince, who has also worked at the Cinematheque since it began over 33 years ago. But I think Tom was the first because he was the only one among us three who had any experience projecting 35mm movies. (He had shown them at lunch hour during the 1960s when he was a student at Charles F. Brush High School in Lyndhurst. How fitting that a school named after the Cleveland inventor of the arc lamp, which allows the illumination of motion picture images on big theater screens, should produce a film projectionist!)

Tom was a good projectionist, too. For most of his career, he worked two days a weekend—generally Friday nights and all-day Sunday. This meant that he was at the Cinematheque almost twice as much as Les and our third operator, Mike Glazer, who came on board in 2000. When Tom’s health was good (95% of his time with us), he was a paragon of dependability, showing up in all kinds of weather and even working days when he should have been home in bed. (Instead, he opted to lie down on the booth floor between reel changes.) Because he was a self-employed house painter when he wasn’t projecting movies, and almost never traveled, Tom’s schedule was open and flexible. He often filled in for Les and Mike whenever their full-time jobs or vacations compelled them to miss a shift.

Tom certainly liked movies, especially sci-fi films, but he also loved and collected music. He was partial to offbeat or little-known indie artists that would most likely be heard on college radio, and he enjoyed picking the CD or cassette that would play in the auditorium before each movie. Sometimes he chose something that would complement the feature. But most of the time, Tom just liked to share his eclectic music library with early-arriving audience members, or maybe just listen to his favorite tunes as they emanated from our surround sound system. Nino Rota’s Fellini melodies and Michael Nyman’s scores for Peter Greenaway were recurring favorites of his that almost became the soundtrack of the Cinematheque.

Tom attended Case Western Reserve University for a time so he also liked the written word. Between reel changes, he spent a lot of time in the booth reading The New Yorker or doing acrostics, and he bought scores of books and periodicals on movies and music. Many of these he shared with us.

Tom was a big guy, certainly over six feet tall, with a large frame, short-cropped hair, and a round, rugged face. But beneath the intimidating appearance was one of the sweetest, most mellow and soft-spoken guys you’d ever meet—a gentle giant.

What I admired and envied most about Tom was his kindness and his generosity. He had two younger twin brothers, Andrew and Ron, who were both intellectually disabled and lived in a group home. Big brother Tom frequently took them out to dinner (the Sedlaks’ parents died many years ago) and often brought them to the old Cinematheque on Sundays he worked. Andrew and Ronnie weren’t especially interested in our movies. But they loved the food and snacks in the Cleveland Institute of Art’s vending machines, and spent many Sundays hanging out in the school lounge while Tom projected films in Aitken Auditorium. Andrew and Ron both died a few years ago.

For many years up until his death, Tom provided rides to and from the Cinematheque to John Wall, a longtime patron who didn’t drive and had trouble walking after he had a stroke. (John lived almost six miles from University Circle.) Tom went out of his way scores of times to get John to the movies and back.

Tom was also our go-to guy whenever our screen masking (the black border around the image) in our old theater needed to be repaired. Since that masking was nothing but duvetyn fabric stapled to plywood boards that were then nailed or screwed to a wooden frame, it would frequently come loose, exposing nail and screw heads and wood to the audience. As a house painter, Tom had no qualms about standing on a ladder with a razor blade, staple gun, and small pieces of duvetyn 12-15 feet above the stage to make these regular fixes.

Tom never married or had children, but he lived for many years with Jan Emling, a longtime librarian for the Cleveland Public Library. A few years after Jan retired, she moved to an assisted living facility and relinquished her house. Tom also had to move. But Tom visited Jan every day and spent many nights sleeping in a chair by her bedside. Jan preceded Tom in death by about a year.

Tom was a regular attendee at the CWRU Film Society’s annual Science Fiction Marathon. That event always begins on a Friday night in January and runs until the wee hours of Sunday morning. So Tom would work on Thursday instead of Friday during marathon weekends. On the Thursday night before this year’s 45th CWRU Sci-Fi Marathon (January 16), we will pay tribute to Tom with a special Cinematheque screening of a science fiction film that he felt was underrated and under-shown, Donald Cammell’s 1977 cyber-thriller Demon Seed. After the screening, attendees are invited to share memories of Tom from the Peter B. Lewis Theater podium. And the movie, of course, will be projected from 35mm film.

CIA alum Amber N. Ford developed her love for portrait photography while working on her BFA, which focused on portraying Black men. Today, she continues her great work. Read more about her practice from @clevelanddotcom. https://t.co/frLCLUtZKV

Congrats to Derek Walker, whose "Remain Myself" won the Board Grand Prize at this year's Student Independent Exhibition! Bravo to all the #SIE75 award winners, accepted artists and committee members on a great show! View all artwork and awards info at https://t.co/XzMUY0b4Yj. https://t.co/cZ6k72Fv9s

Happy Lunar New Year! May the Year of the Ox bring an abundance of happiness and good health. #LunarNewYear https://t.co/DSAQgCYvTN