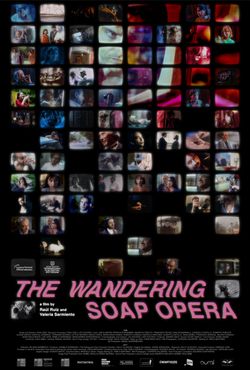 I am occasionally reminded just how few exhibitors in the U.S. show the new foreign and indie films the Cinematheque premieres in Cleveland. This happens often when a film we are premiering arrives especially early from the previous exhibitor—sometimes four to six weeks before our playdate! One such movie was Raúl Ruiz’s The Wandering Soap Opera, a 1990 film left unfinished by the late Chilean-French master who died in 2011, but completed in 2017 by Ruiz’s filmmaker wife and widow Valeria Sarmiento. The finished work was recently released around the world.

The Wandering Soap Opera opened in New York City on May 17 of this year, in Chicago on May 31, and in Los Angeles on June 7. The New York Times and the Los Angeles Times printed exceedingly favorable reviews of the picture, and RogerEbert.com ran an outright rave. The film earned a 100% critics rating on Rotten Tomatoes, based on nine reviews. Despite this, and despite Ruiz’s name and exalted international reputation, the film seems to have played subsequently in the U.S. in only a handful of cities. In addition to Cleveland (we showed it in August), it screened in Baltimore, San Diego, Portland (OR), Oklahoma City, Madison, and Hudson, NY. (This information is gleaned from the movie’s website created by the film’s U.S. distributor, Cinema Guild.) Can it really be that The Wandering Soap Opera did not open in San Francisco, Boston, Washington, Seattle, Philadelphia, Houston, Austin, Denver, Minneapolis, Nashville, and Columbus? If so, how lucky are we in Cleveland to have a movie theater that did present it?

In July we received another Cinema Guild release from its previous exhibitor long before our engagement. That movie was Grass, a new film by prolific South Korean auteur Hong Sang-soo. Hong is one of the darlings of the international film festival circuit, and his new movies routinely play (and win prizes) at Cannes, Venice, Berlin, Toronto, New York, London, et al. Grass, which opened theatrically in New York on April 19, garnered a 95% critics rating on Rotten Tomatoes and an impressive metacritic.com score of 77 (out of 100). Yet, after New York, the movie seems to have played theatrically only in L.A., Chicago, Washington, San Francisco, Oklahoma City, Austin, Houston, and Silver Springs, MD, in addition to Cleveland. (Again, all this is according to the movie’s U.S. website.) Grass and The Wandering Soap Opera are only two of the 100+ acclaimed and important new international films that the Cinematheque premieres exclusively in Cleveland every year. So northeast Ohio film buffs are fortunate indeed.

Homecomings. Our November-December schedule is packed with homecomings of sorts. On Saturday, November 2, internationally known silent film accompanist Dennis James makes his first appearance at the Cinematheque since December of 1987. Though born in Philadelphia, James was the Resident Organist for the Ohio Theatre in Columbus from 1975 to 1989. He has accompanied silent movies for 50 years now, and, according to one observer, has played “a pivotal role in the international revival of silent films as presented with period-authentic live music.”

The movie James will accompany on November 2 is D.W. Griffith’s century-old True Heart Susie. This celebrated pastoral romance stars Ohioan Lillian Gish, one of the screen’s most iconic and enduring personalities, whose stellar career spanned the years 1912 to 1987. Born in Springfield, Ohio, in 1893, Gish and her sister Dorothy grew up in Massillon, a little over an hour away from Cleveland.

The Loveless, the first feature film directed by future Oscar winner Kathryn Bigelow (The Hurt Locker), premiered in Cleveland at the Cinematheque in September of 1986 in a series entitled “Cult Films of the Future.” I have long wanted to show this stylish 1983 motorcycle movie again, especially since it also features the screen debut of Willem Dafoe (who has visited the Cinematheque twice in recent years), and was produced by Grafton Nunes, now the President + CEO of the Cleveland Institute of Art. But I knew of no good prints. Now the film has been digitally restored from the original camera negative by Arrow Video, and we will show a DCP of this restoration, with Grafton Nunes in attendance, on Saturday, November 16. So another homecoming.

Finally, Julia Reichert, Ohio’s foremost documentary filmmaker (and one of America’s finest), returns to the Cinematheque with her latest nonfiction feature, the Cleveland-referenced 9to5: The Story of a Movement, on Thursday, November 21. Julia, who has been making films for a half century now (her regular co-directors include Jim Klein and Steve Bognar) and has been nominated for three Academy Awards, is the subject of a well-deserved touring retrospective organized by OSU’s Wexner Center for the Arts in Columbus. (We will host the series between November 21 and December 15, though Union Maids will show at the Cleveland Museum of Art on Friday, November 23, at 7:00 pm.) I can’t remember the last time Julia (who lives in Yellow Springs) visited the Cinematheque. But I notice that her 1993 narrative feature, Emma and Elvis, an outlier in her filmography that she presented at our old theater 26 years ago, is not included in this current series.