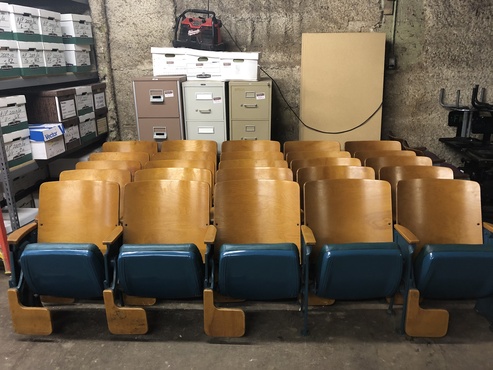 In my last column, I extolled some of the virtues of digital projection of movies (as opposed to film projection, which the Cinematheque did exclusively for well over 25 years). But I forgot to mention two other advantages of this new technology. One is that digital trailers (coming attractions) are much easier to organize and program than are film trailers. A digital trailer, like a digital film, is just an individual file ingested onto—and shown from—a server, so they can easily be selected and organized into playlists. We construct a playlist for each show we present. A playlist generally consists of five or six trailers, the feature film, black buffers between files, and assorted projector commands. Nowadays we can remove or rearrange trailers with a few clicks of a mouse. In the old days, it took two or three separate reels or spools, a splicer and splicing tape, and the projectionist’s time to make additions or subtractions to the “hard-wired” trailer reel that was projected before each feature. To circumvent that labor, previews that weren’t shown before every program were sometimes placed at the head or tail of the trailer reel and then skipped during projection.

The second added advantage to digital films is that movies are more accessible than they used to be. In the era of film-only projection, each distributor had a limited number of prints available to theaters across the U.S. Small companies sometimes had as few as two or three 35mm copies of the new foreign films or newly restored classics they released. So Clevelanders would usually have to wait a few months to see such releases here, because the prints first had to play in bigger, more profitable markets like New York, L.A., Chicago, Washington, Boston, and San Francisco. The paucity of prints and the time required to ship them from city to city meant that some hot new art films didn’t debut in Cleveland until they were pretty lukewarm (if not downright cold)—four to six months after debuting in NYC. By that time, the print was somewhat beat up and any publicity generated by the New York opening had largely dissipated.

But in the world of digital cinema, many distributors contract with labs to manufacture hard drives upon demand. Cleveland is now able to play specialty art films concurrently with larger cities. Even the smaller distribution companies that don’t do this, opting instead for circulating a limited number of hard drives containing a particular movie, can still have their films play in multiple cities at the same time. They just need to ship out the drive well before its playdate, have the theater ingest the movie right away, and then ship it on to the next customer, who does the same thing. As long as a theater has enough space on its server, a digital file can sit there for months (or even years) waiting to be projected.

I’ve been saying so many good things about digital cinema in these past two columns that some of my old compatriots in the fight to save 35mm film prints and projection probably now regard me as a turncoat. I hope not, because I still love and show film. (To me, watching a superb film print is akin to looking at an original oil painting—not seeing an expert reproduction.) The problem is that all film prints are not superb, and I’m beyond regarding film itself as an absolute good, preferable to all other alternatives. As part of our recent Ermanno Olmi series, we showed a rare 35mm print of his 1959 debut film, Time Stood Still, that had an annoying soundtrack noise (probably due to film shrinkage) that lasted for most of two reels (20-30 minutes). The only way we could have eliminated this noise, as I understand it, would have been to realign our projector’s sound reader. But this would have then messed up the proper reading of sound on all non-problematic prints (99% of what we show), requiring a technician to come in and re-calibrate everything. I would have taken a clean, noise-free digital restoration of Time Stood Still over that imperfect film print any day.

Mark Rapp, who compiled The Plain Dealer’s Friday magazine “Silver Screen” listings for (I think) as long as the Cinematheque has been around, has died. Mark, a stickler for accuracy, gave our offerings a lot of ink in that column over the years. He also attended our movies from time to time. We thank Mark for his unflagging weekly support that undoubtedly helped us survive for as long as we have.

The Aitken Auditorium seats that were pulled out of our old theater before it was demolished last year must be dispersed very soon. So anyone interested in buying some of these chairs should send an email expressing that interest asap to cinema@cia.edu. The price has not yet been determined, but we have only 25 seats (five rows of five) available. (See photo above.)

Time to retire? You know you’ve been programming films for a long time (maybe too long) when movies you debuted when they were new return to your screen many years later as restored and re-released film classics. This has been happening for a few years now, and it occurs again in October when Béla Tarr’s 1994 Hungarian masterpiece Sátantángó comes back to the Cinematheque in a 4K restoration for the movie’s 25th anniversary. Between 1996 and 2007, we presented three separate engagements of this seven-hour epic. Yes, I said “seven-hour.” Despite that, don’t miss it.