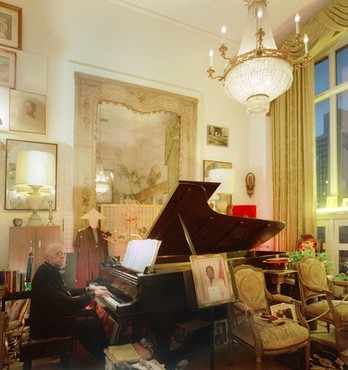 If you saw Green Book, then you should see the real Dr. Donald Shirley in the 2010 documentary Lost Bohemia on May 5. (Shirley is the classically trained African American pianist who is driven around the American South by Viggo Mortensen’s character in that Oscar-winning film.)

But if you did not see Green Book, you should still see Lost Bohemia. This beautiful and moving film documents the closing of the Carnegie Hall studios during the first decade of this century. The Carnegie Hall studios were unique live-work spaces, located above the famed concert hall, that housed scores of famous artists for over a century—actors (Marlon Brando, James Dean), dancers (Isadora Duncan, Martha Graham), musicians (Enrico Caruso, Leonard Bernstein), writers (Mark Twain, Elizabeth Sargent), and photographers (Bill Cunningham), among others. Starting in 2001, longtime tenants of this artists’ colony (some of whom had lived there for decades) were systematically evicted and their studio apartments destroyed—converted into offices and rehearsal spaces. Fortunately, Lost Bohemia director Josef Astor, a photographer who had lived in the building for 20 years, captured his colorful neighbors and their eccentric abodes on video before they were gone. Donald Shirley was among them, so his overstuffed apartment, bursting with bric-a-brac, is seen in Lost Bohemia (and re-created in Green Book).

Beyond recording the real Donald Shirley (perhaps the only film to do so; Mahershala Ali viewed it to get a handle on his character), Astor’s film is an invaluable record of a now-vanished world. As such, it is a noble use of the film medium. It gives me great pleasure to say this because I have known Josef Astor for years. In fact, he is my oldest friend with whom I am still in touch.

Josef (then Joe Greenberger) and I grew up on Dennison Place in Canton, Ohio, back in the 1950s. He lived across the street from me, two houses down, and we played together most days and attended the same private kindergarten. After one year together at Edgefield Elementary School, my family moved to the ‘burbs. So Joe and I didn’t become classmates again until junior high and high school. We both graduated in the Glenwood Class of 1969. (Our 50th reunion is later this year)

Joe was the most talented artist in our class. He designed the yearbook and went to Syracuse University after graduation. Then he moved to New York, turned up as a fashion model in some mail order catalog I received one year, and launched his career as a professional photographer. (His photos have been published in Vanity Fair, GQ, and The New Yorker, among others.) Though we would see each other at reunions every five or ten years, we didn’t really stay in touch. We reconnected when I got wind of his Lost Bohemia movie and brought him back to Ohio for the first of the three separate engagements of the film that I presented at the Cleveland Museum of Art in 2011 and 2012. (The audience loved the movie.)

As far as I can determine, I have never shown Lost Bohemia at the Cinematheque. I was reminded of Joe’s film when I saw Green Book, remembering that Shirley was a prominent presence in it. So I booked the movie for one more showing at the art museum on a Tuesday afternoon in March. Once again, it was well attended and well received. I decided to give it another screening, this time on a weekend at the Cinematheque, a little later. Hence, our May 5 matinee.

Joe tells me that a lot of footage of Donald Shirley was left on the cutting room floor. Given the success of Green Book, he’s assembling a second film, on Shirley alone, from those outtakes. We may show a trailer for this upcoming movie before Lost Bohemia.

Genevieve Schwartz is the new Assistant Director of the Cinematheque. She started working full-time in that capacity on February 18. Genevieve had been a part-time Cinematheque ticket seller since 2009 and a volunteer ticket taker for two years before that! (I’d say she’s paid her dues.) So she’s a familiar face, and many of you already know her.

Genevieve’s previous full-time position was with Heights Arts in Cleveland Heights. She’s also a professional jewelry designer, having graduated from Kent State with a BFA in Metals and Jewelry. I’m pleased and proud to have her as the Cinematheque’s second-in-command.