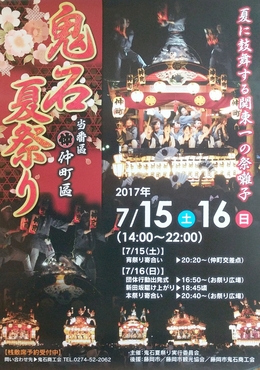 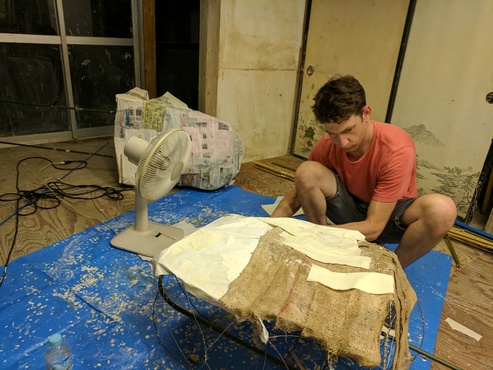 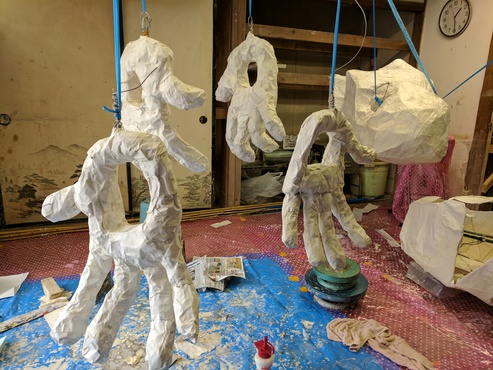 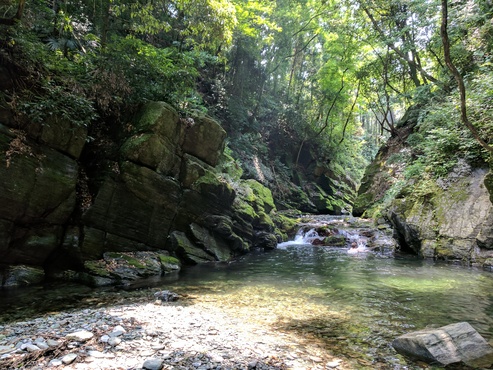 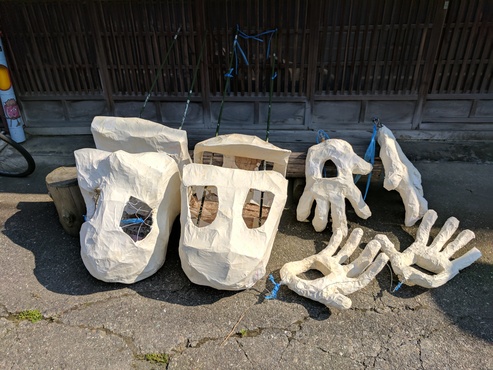 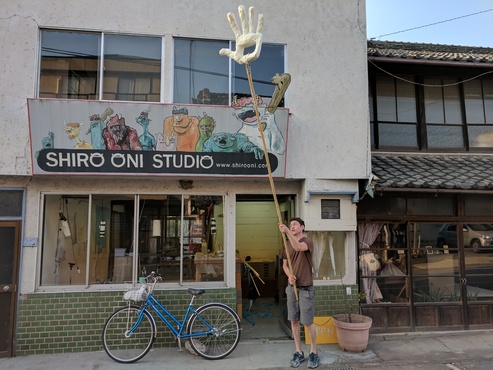 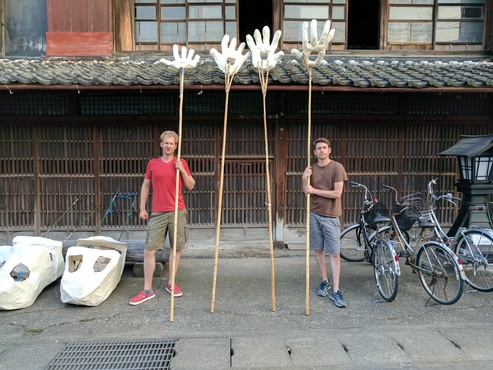 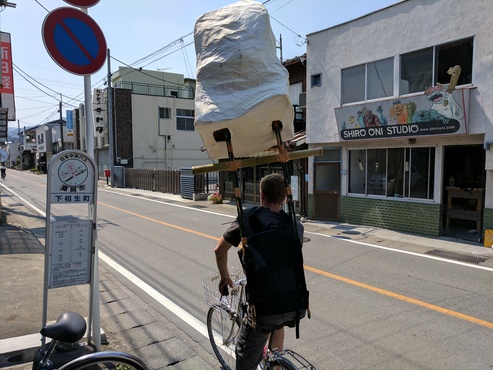 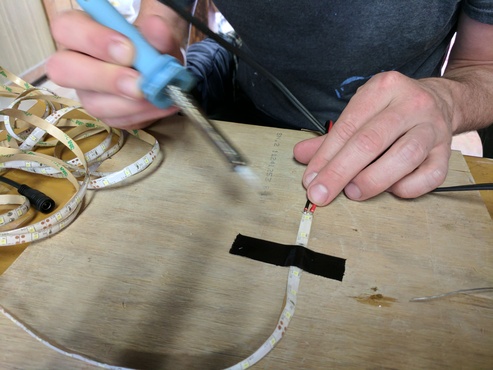 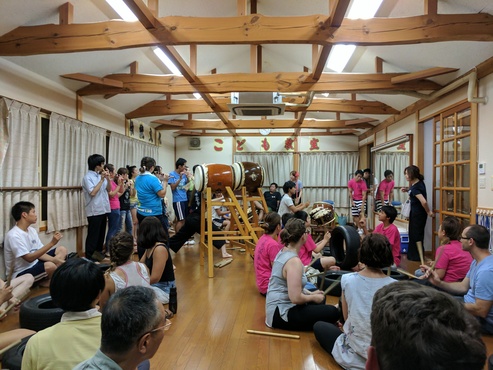 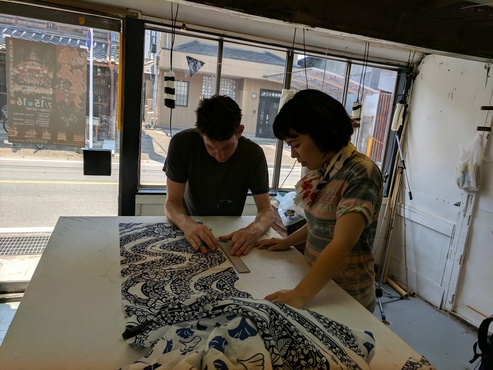 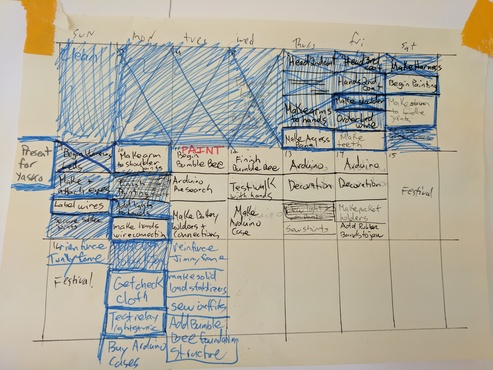 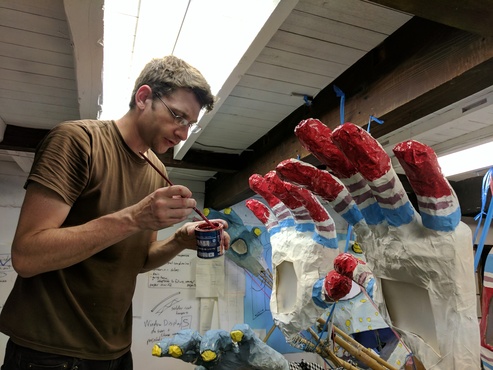 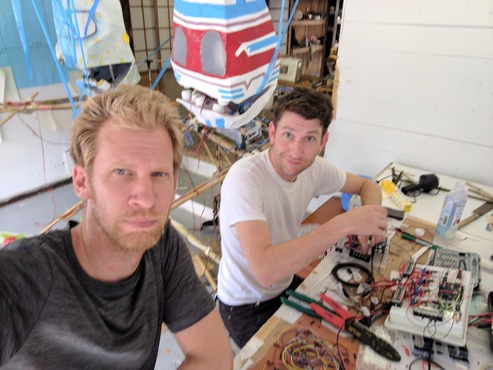 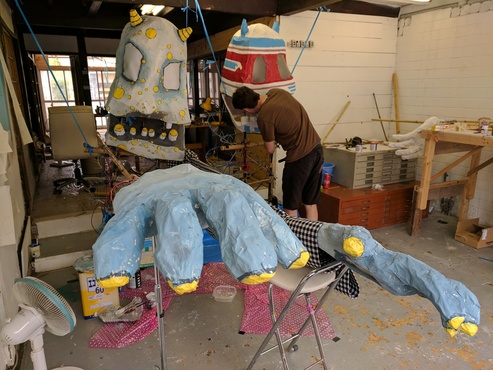 CIA faculty members Tony Ingrisano and Jimmy Kuehnle are in Japan for six weeks this summer for a residency at the Shiro Oni Studios, which lies two hours north of Tokyo in a small town called Onishi. They'll share their experiences on the blog along the way. This is their second post since arriving in Japan on June 26.

The matsuri (festival) is right around the corner. We’ve been working nonstop in the studio trying to complete our project for the festival, so this is a good time to check in and catch everyone up.

Things have been crazy. We have been so busy recently with the project that the only thing we are looking forward to as much as the festival is to have a chance to breathe.

We knew we were undertaking a big project, but could not have anticipated just how many components would take up so much of our time, and how strained we’d be at this point. The only thing keeping us sane is the matsuri on the horizon. It’s great that the two of us share an obsessive need to organize. We spend 48 hours in a working frenzy, and then spend a morning cleaning the studio, updating our charts and timeline, and planning what to focus on next. We have been fastidious in re-assessing our goals and challenges. Then we mess the whole place up again!

After drawing up preliminary plans and sketches, the process began by scouting materials, no small challenge in this tiny town. We biked to flea markets, hardware stores, and searched the web for DIY solutions to the things we couldn’t access in person. An Amazon Japan Prime account was established and electronics parts began arriving on a daily basis. We faced major setbacks due to the limitations of the materials, and worked through them as best as we could. The town is so small that the mailman now holds onto anything addressed to us until he sees us around town during the day. It is very endearing.

The weather presents another huge challenge. Temperatures are rarely below 90 degrees farenheit in the daytime, and the humidity routinely reaches 85 percent. Sending one person to the hardware store would save time, but usually we go together just to get a few minutes of air conditioning.

While the physical aspect of our project grew into something more coherent each day, the nature of it expanded. As professors, we constantly see students freezing up and not producing because they lack a fully formed idea. The best response is to encourage them to just start making. It’s often in the doing of the thing that the reasons and ideas behind the thing become clearer. We started with a loose plan. By diving into production, the initial ideations tightened up immensely.

We always knew we wanted to create an interactive piece that would be a part of the matsuri and engage with the crowd. Hundreds of people flock to this small town for the Matsuri. We settled on building creatures with large heads and long arms that we would wear on our bodies, and move them through the crowds. Lights will illuminate the eyes, palms, mouth and backs from within.

Because the matsuri’s core component is the Taiko drum playing, we will program the lighting to respond to sound input, so that the creatures will light up at each beat of the drum. The volume threshold will be adjustable, so that the lights will react to any noise level when adjusted, allowing people to clap or yell at the suits and cause them to illuminate.

Like so many cultures, Japan has a strong history of myth and storytelling. It seemed clear that the creatures we were building needed a mythology of their own. That story is evolving as we go.

Additionally, we have continued our work engaging with the community. We attend Taiko drumming practice every night for about two hours, fastidiously studying and rehearsing the song on our own and participating with the drummers at practice. They have been gracious in allowing us to play with them, and invite us to have dinner with them on occasion. They are excited by our group’s dedication to learning their core song, and the main coach, Totsuga Koji, has volunteered his time to give us two private lessons so far.

The Taiko drums are the heart of the festival. Our little town of Onishi has five community groups who all play their own distinct songs, and during the festival will each be drumming on their custom made dashi (shrine) for the better part of two days. Five drummers, five to nine flutists, and two team leaders play inside the dashi, as three people ride on the roof performing coordinated lantern dances. All of these positions rotate, and anyone who isn’t playing pulls the shrine via two nautical ropes about 40 feet long. The shrines meet at the town center in the evenings for a competitive drum-off.

We are exhausted, running on empty and subsisting on ready-made meals, on the brink of collapse. But the excitement of completing the project and unveiling our work at the matsuri drives us on. We can’t wait!

CIA welcomes Dr. Jesse Grant as our new Dean of Student Affairs! Grant, an Akron native, brings more than 25 years of experience and leadership in student-focused higher education roles. Weâre excited for him to join the CIA community! https://t.co/AZ1JMeW3Nk