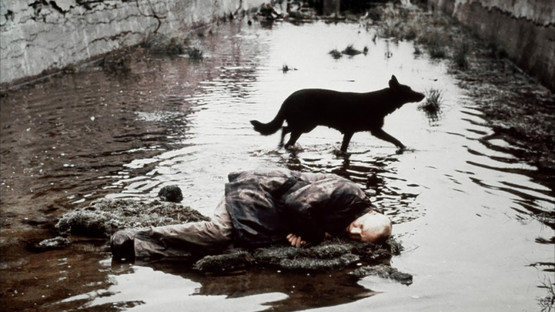 Do I still have the same missionary zeal that I once had to get moviegoers to see films that I am wildly enthusiastic about? I wonder about this from time to time, and confess that some of my enthusiasm has probably dissipated over the four decades that I have been programming and screening movies. Nowadays I have a general sense, reinforced recurrently, that most people like only the kind of movies they are already predisposed to like, and it’s hard to convert them to new varieties of film experiences, especially more challenging ones.

In June we will be showing a new digital restoration of Andrei Tarkovsky’s Stalker, easily one of my 20 favorite movies of all time. Set in an unspecified, decrepit (possibly post-apocalyptic) future, this 1979 classic imagines a forbidden region (the “Zone”), cordoned off by the military, that can be breached and explored only by a special guide (or “stalker”) who understands the invisible threats and illogical laws of nature that govern this dangerous, even deadly area. Tarkovsky’s movie follows a stalker who leads two men—a writer and a scientist—into the Zone, and toward its inner sanctum (the “Room”), where it is rumored that one’s deepest desire will come true.

For me, this sci-fi fable has everything: a fascinating premise that quivers with political, psychological, and metaphysical meanings; a vividly realized “alternative universe”; stunning cinematography (in sepia and color); indelible sound effects; nonstop mystery and suspense; and moments of unexpected, incongruous humor (e.g., a telephone ringing in the Room).

I would hope that first-time viewers of Stalker would enjoy all these elements as much as I do, coming away from the movie shaken and stirred (apologies to James Bond). But I know from my long experience of watching people watch movies that many won’t. Stalker is 161 minutes long. It is s-l-o-w, with lethargic forward momentum and long stretches without dialogue. There is no “action.” The main characters are pretty much symbolic ciphers and the story is cryptic and ultimately inscrutable. Some audience members might walk out. But since Cinematheque patrons tend to be polite, most who are bored by Stalker will probably just endure the movie silently, rather than draw attention to themselves (and risk offending me) by bolting for the exit.

So, when pushing our engagement of Stalker, should I buttonhole patrons and twist their arms—insisting that they have to see this masterpiece? That’s what I would have done 20 or 30 years ago. But now? When I already know that many Cinematheque patrons’ tastes don’t jibe with Tarkovsky’s aesthetic? More and more, I just let the impersonal, anonymous web and calendar blurbs do the p.r. work for our offerings, with first-person nudges during pre-show introductions and in this column adding emphasis.

On the other hand, I think there is some value in drawing a movie like Stalker to the special attention of young people. Since many of them don’t know a Tarkovsky film from, say, one by George Cukor or even Michael Bay, they might actually find Stalker different and cool—as I did when I discovered it in my late 20s. And I’ll settle for cool. “Life-changing” is just too high of an expectation.

Jean-Pierre Melville, the great French director known primarily for his crime films and WWII thrillers, is marking his centenary this year. To celebrate the occasion, we are showing six Melville movies in May and June. Though some of the filmmaker’s greatest works (Les Enfants Terribles, Le Samouraï) are in our tribute, other masterpieces (Bob le Flambeur, The Army of Shadows) are missing. How can this be?

Well, comprehensive director retrospectives are a luxury that a single-screen, unendowed art house in a city that’s not exactly a world capital can’t often afford. (However, we did present a near-complete, ten-film Melville series in 1996.) Because we’re one of the few art-film venues in NE Ohio, we need to show a mix of new international films, restored classics, special guests, and even second-run movies in addition to thematic film series and director retrospectives. Otherwise, these acclaimed movies wouldn’t play in the region either. So our Melville tribute has been assembled from films in three different categories: features we haven’t shown as often as some of his others; features that are temporarily in the country in 35mm prints from France; and features that have been newly restored. It’s still a terrific series. Just not comprehensive.