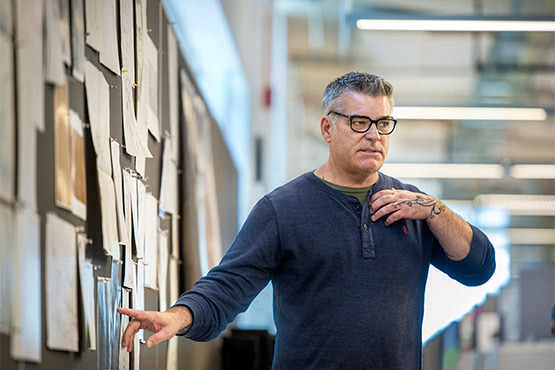 As Director of Character Art at Disney Consumer Products, John T. Quinn and his colleagues draw the Little Mermaid for backpacks, configure Mickey Mouse for designer Vans slip-ons and recreate characters from Cars for the well-adorned children’s bedroom.

Disney doesn’t manufacture all these products themselves; instead, they license and deliver artwork to companies that make and sell them. As Quinn puts it, “If it’s a product and it’s got a Disney character on it, we work on it.”

During a recent visit to the Cleveland Institute of Art, Quinn met with Illustration students, presented a lecture in the Peter B. Lewis Theater, and answered a few questions about his career.

Where did you study art?

I ended up getting married, and then went to the School of Visual Arts in New York, and I graduated there in ’92. I didn’t work while I was in school – fortunately, I didn’t have to work because my wife was working – but then I worked during the summer. I was a driving instructor, I worked for a catering company. Sometimes I worked 90 hours a week.

Did you major in animation?

Illustration. When I was a kid, I read a book called The Animation Book by Kit Laybourne. In the back, there was an index of all the places that did animation [including] Walt Disney Productions. The guy who ran the studio was a guy named Don Duckwall. I know, can you believe it? That was his real name. And the quote from Don Duckwall was “Disney wants people who can really draw.” Ever since I was a kid, I always loved cartoons, but I knew that in order to be a success, I had to really learn to draw.

What were you doing between the time you graduated from the School of Visual Arts and when you started working at Disney?

Teaching. The School of Visual Arts asked me to come back and teach. My wife and I had moved to Lancaster, Pa. I was teaching one day in New York City, teaching one day at a small school in Lancaster, and I was just looking for work. . . . Just to make ends meet, I was working at a Borders Books store. They would build my schedule around teaching, so I was working seven days a week.

How did you finally get hired at Disney?

Every year, Disney would come [to SVA} and they’d say, “Yeah, you have a future with us. Submit your portfolio.” And every year it would get rejected, and I’d say “What did I do wrong?” They’d say, “Nothing. You just didn’t make the cut this time. Keep trying.”

In ’95, I got a phone call from a woman at Disney Consumer Products who said, “Would you consider coming to Burbank?” I’m thinking, are you kidding me? You’re going to pay me to draw cartoons? Yeah, I’m coming!

In the back of my mind, I’m thinking it’s a foot in the door. Once I’m in California, it’ll be easy for me to move over to animation. And I could have, particularly at that time, because Warner’s was doing features, DreamWorks was doing features. But Disney put me under contract so I wouldn’t leave Consumer Products.

Do you get tired of drawing the characters?

The fun of it is you’re always trying to tell a new story. Each character group has a very specific story, and you want to stay truthful to that story. Snow White and the Seven Dwarfs is a German fairytale. They live in the Black Forest in Germany in the 14th Century, so they don’t have electric light, they don’t have TV, they don’t have roller skates. They don’t know what Hawaii is. We always get, “Oh, let’s do Grumpy with a surf board.” But he has no idea what that is, there’s no way you can do that. You have to find a way to be authentic to the stories but still bridge the gap between what the modern audience wants or what your licensee wants.

What are some highlights of your career?

In the time that I’ve been in Consumer Products, we’ve done some really exciting projects that have involved animation. And I’ve gotten to work with some great outside studios.

There’s an animator named Ken Duncan who runs a studio in Pasadena. He animated Jane in Tarzan, he animated Meg in Hercules. He did a three-minute animated feature for us featuring Minnie Mouse for Barneys of New York for their [2012] holiday window display.

Later, we did a public service announcement for Adopt A Pet using the Disney princesses and a program we have called Palace Pets. Again, we worked with Ken Duncan, and I storyboarded that, and I got to see Ken’s team bring my drawings to life. So I never achieved my dream of being a Disney animator, but I’ve achieved my dream.

Do you still draw for yourself?

I draw every day, I love to draw. If I don’t draw, I do get depressed, so it has a real impact on me. I carry a sketchbook with me everywhere I go.

I think for me, drawing is such a physical thing. I’m taking information in through my eyes, then responding intellectually and emotionally. I’m trying to communicate those responses in the drawing, on the paper. So if I’m at a Starbucks, and I see something and think, Oh, I want to draw that, what is that I’m looking at that makes me want to draw it? What is that, and what do I draw to make that miracle occur in the sketchbook?

When it happens for me, it’s just very satisfying. But it encompasses everything – my eyes, my head, my heart and my hand. It’s not separated.

What kind of advice do you have to give art students about preparing for their profession?

I tell the kids, set your compass to whatever your true north is. But in all your preparation, you don’t know what you’re preparing yourself for outside of what you think is your North Star. So you’re doing all this work, and then suddenly there’s THIS opportunity, but you’re already prepared, so you seize it. 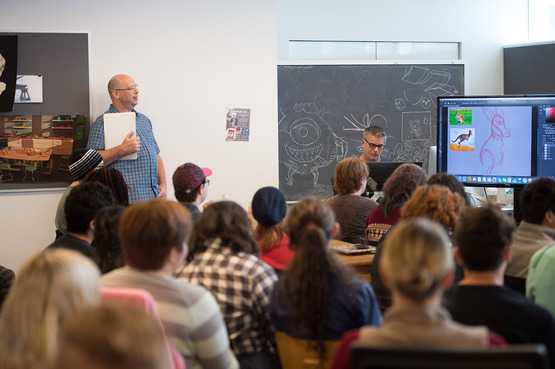