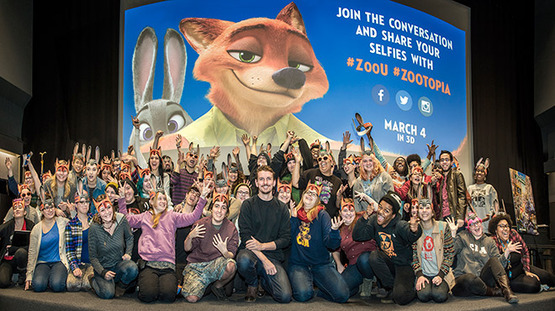 Nick Orsi has spent a lot of time with foxes and rabbits. As a character designer in the visual development department at Disney Animation Studios, Orsi studied animals to help create the main characters in Zootopia. (“The foxes were really interesting,” he said. “They kind of stare into your soul.”) The new animated adventure, which took more than five years to complete, stars a con-artist fox named Nick Wilde (voiced by Jason Bateman), and a rookie bunny cop named Judy Hopps (Ginnifer Goodwin).

Orsi, 29, recently discussed the art of animation in CIA’s Peter B. Lewis Theater for more than 100 students and faculty. An oil painter in college, Orsi initially worked as an environment painter in Disney’s training program, and later apprenticed under Zootopiadirectors Byron Howard and Jared Bush.

At Disney, a few artists (very few) still create characters using traditional techniques. Orsi discussed that and other topics when he sat down for an interview following his presentation at CIA on March 2.

How do you feel about traditional drawing methods versus digital animation?

Everyone is trying to understand this digital medium right now, and figure out how to push it and how to enhance it. The reason I go back to traditional, and the reason I try to draw in traditional style as much as possible, is because it forces me to solve problems more. This is a personal thing. I’ve always struggled with all the basic stuff, with perspective and things like that. I think all artists do. I feel more comfortable with a pencil. It’s what I’ve used since I was a kid. With computers, there’s so much you can do. There’s custom brushes and Photoshop tricks and all the details you can add, and that really distracts me sometimes from thinking about the big idea and the big design. If I just have my pencil and my paper, it makes my life easier.

What were the animated works that inspired you growing up and made you want to get into filmmaking?

The first time I saw Akira I was blown away. Up until then, I just knew animation as this one thing. Seeing Akira [Katsuhiro Otomo’s gritty, apocalyptic action film from 1988] made me realize, “Oh, you can really do something else with it.” Then I saw [Hayao] Miyazaki’s films, and those were just amazing. But I always liked live-action, too, movies that were really imaginative, like Alien, Blade Runner, A Clockwork Orange, 2001: A Space Odyssey. On TV, there was Batman: The Animated Series. That was the one I drew the most from. I used to draw [those characters] all the time. Then I went to school and started actually painting and moved on from just doing fan art.

What was the greatest value from your art school training?

I’m finding more and more it was the large amount of foundation classes I took. At the time, I took a lot of those because I wasn’t sure what I wanted to do. And I was also taking a lot of film courses on the side. I’m realizing now how that strong sense of foundations [drawing, color, value structure, perspective principles, design theory] really helped me to move forward.

What have you learned from interacting with students during your multi-city Zootopiatour?

I still remember the feeling of being in school. The students are all kind of scared. There’s this veil between college and the job. In college, you’re so focused on getting better and finding a job, but you’re also not really sure what’s out there. And student loans are so crazy. But I can say to them, “Look, I’m on the other side, I had those loans, too. Here is what it’s like.” Even if it’s a little scary at times, it helps to just know what’s waiting out there, so that they can prepare themselves, whether it’s financially or artistically.

What’s the biggest kick you get out of your art?

I kind of have this drawing-ADD thing where I just love coming up with ideas. If I have to spend too much time polishing it, I get a little detached. And I really love sitting down with the writers and directors. I learn how to become a better character designer from the writers. They’re talking about the bones of the character, and coming up with all these relatable aspects. It helps me in my thinking when I’m tackling a drawing. It also inspires me to try writing myself.