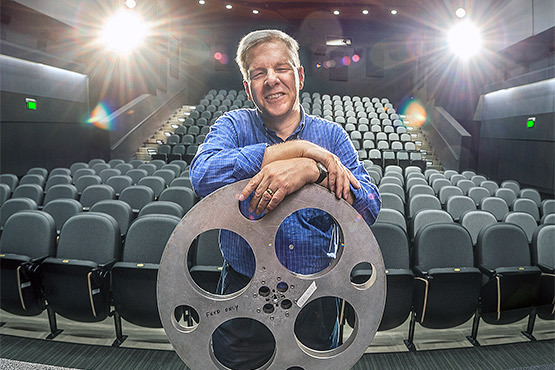 In May 2007 I traveled to the Gene Siskel Film Center in Chicago to see a movie that I thought I would never be able to show at the Cinematheque: Jacques Rivette’s 1971 French New Wave puzzler Out 1. This 13-hour epic was one of the most elusive of all classic films. Originally intended as a TV miniseries but rejected for broadcast, the complete eight-episode movie was exhibited publicly only once, back in 1971. After that, the film sat on a shelf for 19 years. In 1974, Rivette trimmed and reshaped the 775-minute opus into a four-hour work entitled Out 1: Spectre. Though still long, that shorter film was more easily distributed and shown; even we projected it once. But the 13-hour Out 1 languished unseen, entering the realm of movie legend. It resurfaced briefly in Berlin and Rotterdam in 1990, then went back into hibernation for another 14 years. In 2004, it received the first of several special two-day screenings that would take place during the next few years in various large cities around the world. Chicago was one of them.

There were impediments to presenting the complete Out 1 in Cleveland beyond its extreme length. The main one was that the film had to be shown from a 16mm print that did not have English subtitles. Though subtitles had been written for the film, they had to be projected digitally from a separate computer file, and also advanced manually (for 13 hours!) by someone fluent in French who would understand when each title should appear. This represented a lot of extra trouble and expense, and introduced a host of potential problems. I was also dubious about the payoff (in attendance and revenue) if I attempted a marathon screening of Out 1 in Cleveland. When the Vancouver International Film Centre hosted the North American premiere of the uncut movie in September of 2006, there were all of 22 people in the audience when the showing began. I concluded that a two-day trip to Chicago would be simpler all around.

Now, eight years after my Chicago sojourn, the complete Out 1 can be shown and seen in Cleveland. This is because the 13-hour film has been digitally restored (with English subtitles) and released on DCP. We will show it in four installments on January 7, 14, 21, and 28. Out 1 is only one of three extra-long movies on this calendar. The other two are Matthew Barney’s River of Fundament and Miguel Gomes’ Arabian Nights. But those are only a measly six hours apiece.

Chantal Akerman’s sudden death on October 5 rocked the film world. Not only because we lost a great, original, influential modern voice, but because the Belgian director of Jeanne Dielman and other films was only 65 and had committed suicide. I felt especially bad because I had tried for a couple of years to get Akerman to appear in person at the Cinematheque. She finally agreed to come to Cleveland on October 19, 2013—but then canceled her appearance on October 3 after emailing that she was in Brussels taking care of her “dying mother.” This was undoubtedly true; Akerman’s mother, whom the filmmaker regarded as the most important person in her life, died the following April. Akerman’s last film, No Home Movie, is about her. We show it on February 18 and 20.

David Massaro has also died. A popular English teacher at West Tech High School for 30 years, where he introduced students to countless science fiction and stop-motion film classics, Massaro was also a regular at the Cinematheque for three decades. David was a tireless (and sometimes tiresome) advocate for the films and filmmakers he loved (Things To Come, Willis O’Brien, Karel Zeman, On Borrowed Time, DeMille’s silent The Ten Commandments, the Captain Marvel serial, Delius’ opera A Village Romeo and Juliet, to name just a few) and he delivered spoken intros of some of them (in his booming voice) from our stage. David’s remarks always ran long, despite his repeated assurance that he had timed them so as not to exceed the proscribed limit. But he relished the spotlight and loved to hold court after screenings. Massaro’s greatest gift to the Cinematheque was bringing his longtime pen pal, the great stop motion animator Ray Harryhausen, to our audience in May of 1993 (the same month we ran a five-film Chantal Akerman series, by the way). People still talk to me about that evening. 500+ people attended, and Harryhausen generously and graciously stayed late to sign every poster, VHS tape, record album, model, and piece of paper thrust before him. Massaro, beaming in a white turtleneck and on stage with his idol all night, was in his element.

Cleveland State University students and faculty members who present their CSU I.D.’s at the box office now pay the Cinematheque member’s price to all of our events. This is a temporary arrangement but should be in effect through at least June of 2017. Take advantage if you can.