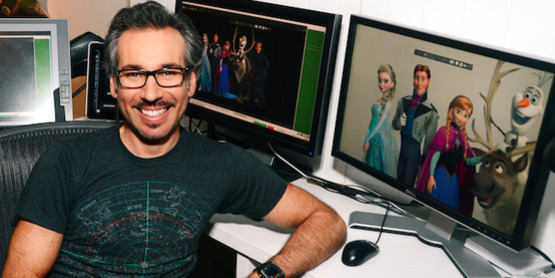 Spend a lunch hour learning about the latest in art and design during these Friday lectures. These lectures feature artists, designers and authors from around the world, including CIA faculty and visiting artists. Free and open to the public. Pizza and beverages will be provided on a first-come, first-served basis.

Join us this Friday for an in-depth conversation with Creative Director at Paramount Animation and Walt Disney Animation Studios veteran, Lino DiSalvo, and former CG supervisor and current CIA Animation faculty, Hal Lewis. During their time at Walt Disney Animation studios, DiSalvo and Lewis worked together on the films Chicken Little, Meet the Robinsons, and Bolt.

DiSalvo served as head of animation on the Academy Award®-winning and highest-grossing animated feature of all time, Frozen. He began his career at the Walt Disney Animation Studios as a character animator after graduating from Vancouver Film School in British Columbia. About a year and a half ago he joined Paramount Animation as its creative director.

Prior to Frozen, he served as supervising animator on Tangled and Bolt. His other film credits include animating on Meet the Robinsons and Chicken Little.

DiSalvo, an avid Muppets aficionado, was drawn to the animation industry after seeing The Lion King on the big screen in 1994. He was born in Brooklyn and raised in Long Island, NY, and he currently lives in Los Angeles, CA, with his wife and son.