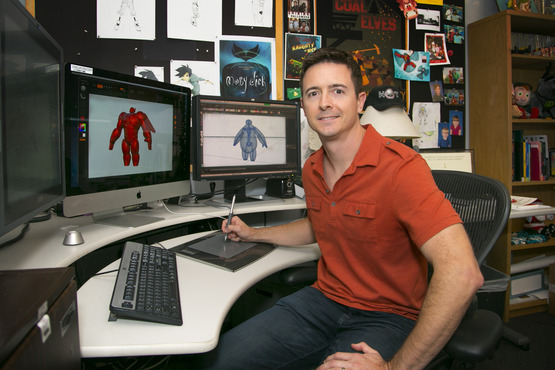 Zack Petroc graduated from CIA in 1997 with a BFA in sculpture. Now he’s at the top of the digital sculpture and animation fields, working as a model supervisor at Disney Feature Animation. Through Zack Petroc Studios (zackpetroc.com) he creates unique new content and offers training for digital artists around the world. He spoke with us after the release of Big Hero 6, which won the Oscar for best-animated film and which earned Zack the award for Outstanding Performance of an Animated Character in an Animated Feature Motion Picture from the Visual Effects Society for his work on the character Baymax.

What brought you from your background in traditional sculpture to digital art?

When I started at CIA I was passionate about anatomy—figure sculpting, stylizing it, putting my own artistic spin on it. I always knew I wanted to sculpt characters and worlds. In the traditional studio, I wasn’t as interested in the materials and the spaces they occupied as I was in the narrative and the story the characters were telling. Then in my third year at CIA, we received our first computers that could handle 3D graphics. I did everything I could to scam my way into the computer lab after hours and before hours. My BFA thesis was a little blended—I had some larger-than-life figure sculptures, then just a few images with computer-generated objects that were composited into real photographs. That’s about as far as I could get at the time; there was no Internet then to look up tutorials and videos.

Which animated features have you worked on during your career at Disney?

I’ve been here just over five years. I jumped on at the very end of Tangled and then went on to Wreck-It Ralph. Then on Big Hero 6, I was the model supervisor. So I was in charge of the entire team that modeled all the characters, sets, and props. I spent quite a bit of time with the modelers who worked on Baymax [the fluffy vinyl robot]. On my current show, Moana, I am modeling, creating characters and sets and whatever assets they need. It’s a nice change of pace to move back from team management to the hands-on experience. Being a part of the Disney process has helped in more ways than I ever could have possibly imagined. It’s helped me understand how important story is—in many ways it needs to precede the art. As a visual artist, it’s easy to get caught up in the beauty of the imagery. But if you don’t have the compelling story to carry the attention, the image never achieves its full potential.

As a modeler, what is your role in the production process?

We typically start with drawings from vis dev [the visual development department] and take a first pass at the concept, quick and loose. Then we bring in the designer or the art director and start to collaborate. We do a lot of on-the-fly animation in 3D—push in points, work on proportions of a face or of a room. As we refine we bring in more people from departments that are going to need to use the assets we’re creating, like rigging, the skeleton of how a character moves, and animation, how it acts. At the end, we deliver a high-res finished character that’s ready for animation, all the way down to the final exterior skin.

What’s been your favorite character to sculpt?

To date, it was the last model I created on Big Hero 6. It’s a Marvel trademark to have a bonus scene after the credits. So we wanted to do something fun in the Disney flavor that pays homage to that tradition. I was fortunate to be able to sculpt a Disney-style Stan Lee likeness—he’s kind of the godfather of the Marvel universe, a cultural icon. Animation is an additive process. With normal film you subtract—you shoot what you want and then take away. It’s so labor intensive to create one extra second of animation. We had two months in total to produce that scene, which is the blink of an eye.

Any advice for young people interested in 3D animation and storytelling?

As an artist, it’s very difficult to separate your life from your career. In many ways your art is an extension of yourself—it should be—and you want to make sure that those two things are working well together. At Disney, we work in a very collaborative environment where you have to put your work up in front of five to two dozen other highly skilled artists and get critiqued on that work. It has to be a part of yourself to hit the level other people expect of you, and you have to be passionate enough about it to take that criticism over and over again in the effort of making the best possible art. CIA really set me up for that. They did a great job of making sure I not only had external critiques with other students and teachers but also learned how to critique my own work.

Two Chloe Niclas works won in a prestigious competition by @AmericanIllust in 2020. She also was commissioned by two high-profile publications. Her artistic style gained notice, and she began honing that style while at CIA. https://t.co/AzYqjmI7UD

Students: Be sure to check your CIA email for info about COVID onboard testingâincluding signing upâfor Spring Semester. https://t.co/wiLBQorF1Z

Happy New Year from the Cleveland Institute of Art! May your 2021 be filled with good health and numerous creative opportunities! #clevelandinstituteofart https://t.co/BBiwLdfHPa