Blog . The Elemental Tetrad of Games

The Elemental Tetrad of Games

Games are complex systems comprising of many different pieces and parts. There’s background design, character design, animation, music, programing, level design and the list goes on. Wouldn’t it be great if there were a way to organize these pieces into some sort of chart? Well good news there is! It’s called the Elemental Tetrad. The tetrad was designed by Jesse Shell and written about in his book “The Art of Game Design.” This is a book I highly recommend to any budding or experienced game designer.

Before we get into the Tetrad lets first establish what a game is. Or rather I will explain what a game’s purpose is. A game, like most artistic mediums, is just a means to create an Experience. That word is the key to good game design. When someone plays a game they are experiencing something. The Elemental Tetrad is a way to balance the parts of a game to create a satisfying experience. And what are these parts?

Aesthetics: This is usually put at the top of the chart because the aesthetics of the game are the most visible aspect. Aesthetics aren’t just the appearance of a game, but everything that appeals to the senses. How does it sound? If it’s a board game what does it feel like, or smell like? Make sure that when creating your aesthetics that they reinforce the other parts of the tetrad.

Story: This is the sequence of events that take place in your game. Who are the characters of your game and how do they interact with eachother? What is the plot to your game and does it contribute to the experience you are aiming to create? Does it reinforce your aesthetics?

Mechanics: This is the core of what makes a game. These are the rules of the game. Some examples of what constitutes mechanics are; Mario can jump, pressing B shoots, players cannot play more than one card a turn, if the soccer ball gets into the other team’s goal your team scores. Mechanics are what make a game interactive so think, “message through mechanic.” Make sure your mechanic isn’t offset by your story or art.

Technology: This is what makes the game work. What is the hardware, or what is your board game made out of? The technology of a game is the least visible part of the Tetrad and is at the bottom. This might not seem important to the aesthetics but the technology limits what is possible. Mario only looks the way that he does because of technological limitations. His mustache is used to define his face and nose. He wears a hat because there wasn’t enough room to animate his hair when he fell. And last he wears overalls so that it is clear that his arms move while running. 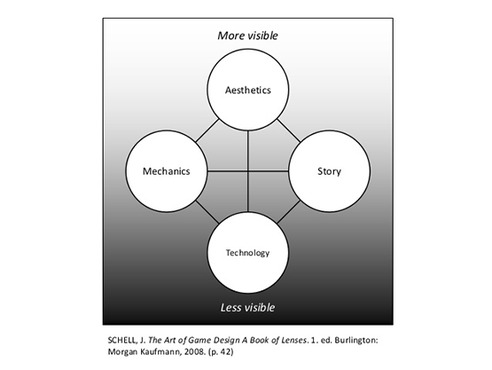 And there you have it. These are the elements of the Tetrad. Wait a minute, aren’t we forgetting something? Of course! The Experience, that’s what this whole chart is for. Each one of these elements is tied to the game’s experience. For example if the game is about making the player feel uneasy and frightened does each part contribute to that? If the game were full of bright happy colors it probably wouldn’t be scary even if the mechanic worked. Each part of the tetrad is interrelated. The mechanics of the game should match the story. The technology should reinforce the mechanics.

I will use a game I’ve been currently working on as an example. The experience that I am aiming to create is a sense of tension though limited resources. I’m attempting to play off of Maslow’s survival hierarchy, specifically the first tier. The first tier is sustenance and air, the things we absolutely require in order to live. Now lets look at how I have used the Tetrad to build a game around this experience.

The Mechanics: The player is in a zero gravity environment and by firing a gun can move in the opposite direction. The player has only two resources, ammunition and oxygen. Both are needed to progress and are equivalent to sustenance and air. The environment is full of hazards and predators that can deplete these resources. The enemies break up the monotony and make the player even more cautious of their surroundings.

The Aesthetic: I use a cool color scheme primarily consisting of blues. The color blue is calming and is close to black in the color spectrum. The calming nature lures the player into a false sense of security that creates fear through imagination. Though I make sure that the ammunition boxes and O2 tanks have bright greens in them. This reads as good while the enemies are red, reading as hazardous. 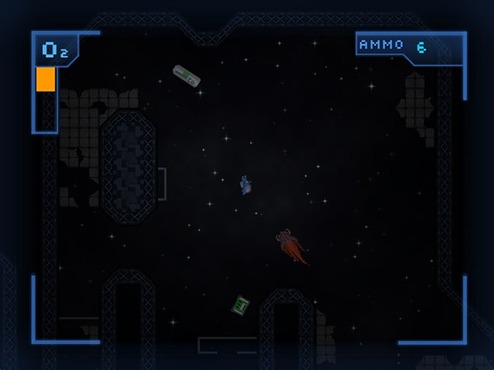 The Story: The space station you are stationed at, is hit by a mysterious asteroid. The station is destroyed and the player is left helpless in space, desperate to find a way home. I chose this story because a person lost in space already lacks what is essential to survival. A person lost in space is a far from help as can be, leaving the player to fend for themselves on the station. 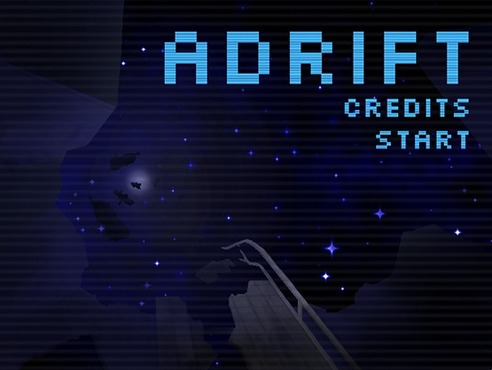 The Technology: I chose to make this game using the engine Stencyl, and to publish it as a Flash web-browser game. The technology affects what I can do aesthetically and mechanically. I chose it because it was simple and it keeps what I do simple.

It’s difficult to pull together so many different aspects of art and design into creating an experience. The Elemental Tetrad functions as a way to organize all those different bits and pieces. Use it as a way to pinpoint the core experience you are trying to create because the more you understand about your art the better it will be. Use the Tetrad to break down and analyze other games and artwork to see what they are made of. A game that is easy to analyze with the tetrad is Space Invaders developed by Taito. The game ushered in the golden age of arcade games and uses each part of the tetrad to create a tight experience. The Elemental Tetrad is a tool for creating an experience because design decision should never be arbitrary.