How to Survive Global Game Jam 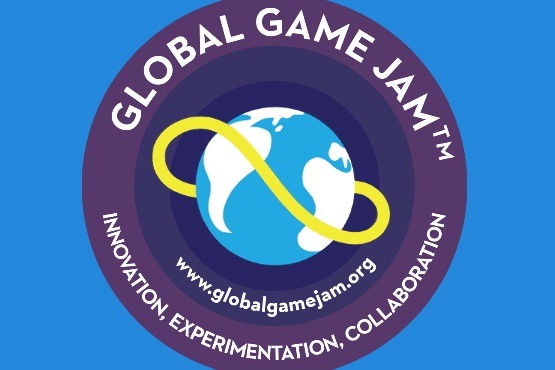 What is a Game Jam?

A game jam is an event where people interested in game development get together to make a game over the course of one weekend, or 48 hours. At the start of a Jam, a theme will be announced that the game’s design must follow. Themes can be as simple as “deception”, or “survival.” They can also be more complex like the theme of the 2015 Global Game Jam, “What do we do now?” After the theme is announced individuals or groups will pitch an idea and form a team to work with. Global Game Jam is the largest game jam in the world with people gathering at locations all over.

Why Should You Jam?

This is a good question. Global Game Jam can be extremely stressful and difficult but is just as rewarding. There will be a lot of game designers, artists, programmers and more who attend. Some with years of experience and this can be intimidating. Don’t fret, because Global Game Jam is about teamwork and networking. It is a great chance for building teamwork skills. Some game companies host their own game jams just for the purpose of strengthening teamwork.
In the end you will have made a game. Even if it feels unfinished, a game was made in 48 hours and no matter what, that is something to be proud of. Most importantly though, you should Jam because it is fun. 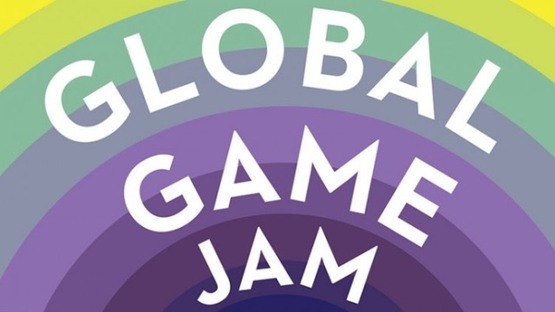 Global Game Jam starts with people wandering around and mingling with each other. When everyone has gathered a presentation will begin. During the presentation select game designers will speak and the theme will be announced. After the announcement, a 15 to 30 minute dinner break will take place. It is during this time that people are to think of an idea for a game based on the theme. After the dinner break people will pitch their ideas and ask for people to join them based on their skill sets. After the pitch session is over teams will form and Game Jam begins. Teams will work on their games until Sunday evening, approximately around the same time the Jam started. Teams will sign in and present the games that they made. Each team will upload their game to the Global Game Jam website so that it can be played by anybody. To view the page for the Cleveland location click here. 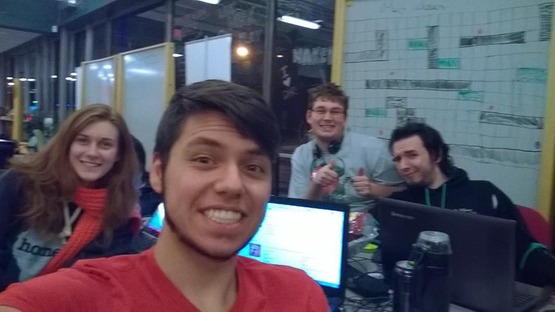 Global Game Jam 2015 was my first Global Game Jam. I attended it alongside several of my fellow CIA Game Design Students. My team was comprised of three other sophomore game design students, a freelance composer and myself. After the theme “what do we do now?’ was announced we each came up with ideas and decided on the idea of “what do we do when you don’t know the controls. You press buttons until it works.” That was basically our pitch. We didn’t explain what we had in mind for mechanics all too much. I said that we were all artists and that I could program, but would rather do art. In the end I was the programmer. We knew we wanted it to be a side scrolling platform game so I began programing simple platform mechanics right away while we discussed the specific mechanics, story, and aesthetics of the game. Everybody sketched out ideas and we made sure to share these sketches with eachother regularly. We also used two white boards to make our ideas clear and organized. We eventually decided on a 1960s, “Yellow Submarine,” theme. By the end of the night we had a basic sprite for the two players, enemy, a tile set, and I had the basic platform mechanics working. Two of the group members left to go to sleep around 3:00am while the rest of us worked. I was working on the primary mechanic of the game while my partner was working on our game’s lava lamp background.
I went to sleep on my air mattress around 5:00am and woke up at 9:00am. This was the most sleep I got while at the Jam. On Saturday we asked a freelance musician to compose a song for our game and got the music file around 7:00pm. Around 3:00 am I had the game complete, give or take a few minor components that I added before the presentation. Our final product was “Bubble & Broc,” a cooperative game that is a combination of Twister, and Mario. The game can be played here. 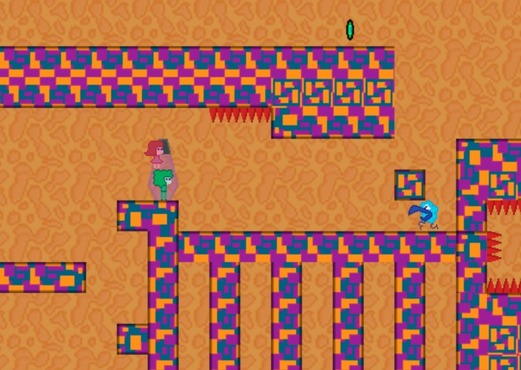 Game Jam is stressful and a lot of hard work, so here are some tips on how to really Jam.

I found that it was a good practice to have a base team before going to GGJ. Many people go there having teams in mind. A base team is a great way to fallback if for some reason you don’t find people you want to work with. Though generally it is quite easy to team up with people, all you have to do is ask.

You may feel like you have to do nothing but work on your game while at game jam. If you do this though you will drive yourself crazy and quickly find yourself making mistakes and not enjoying yourself at all. Every now and then when you feel a creative block take 10 to 20 minutes and do something not related to your game. Take a walk, or watch a silly video and talk to people. Do something to pick yourself up.

• Don’t forget to get some sleep

You will more than likely get so into your work that you won’t want to sleep. On my first night I only had 3 hours of sleep. After waking up I worked for another 16 straight hours. Needless to say, I was exhausted and some of my work suffered, so take some short 45 minute naps. It’s just enough time to go through a R.E.M. cycle and feel refreshed.

You are what you eat so treat your body well. Most food provided at Game Jam is junk food and food meant to keep you awake. Make sure you eat some fruit though. If you are unsure whether or not fruit will be provided bring some of your own. Especially apples because they will give you a boost of energy with little or no crash.

• Don’t add bells and whistles to a bike with no wheels.

This means don’t decorate something before it works. Think simply. Many Game Jam games are just squares and that is just fine. In order to get to work a programmer needs to know what they are going to program. As a team, figure out your game’s basic mechanics as soon as you can so that the programmer can start working on the foundation. Don’t start your project talking about how the game should look.

If you are working in a team, communication is key. This is true with any project and as previously stated Game Jam is a great place to practice it. Share ideas and sketches with everyone so that your project can stay consistent. Make sure the programmers know of any mechanics that change during the design process. Grab some dry erase markers and find a whiteboard, they are usually provided. Write down all ideas and check the ones you use. This way everybody can see what is happening in the game design and throw in ideas easily.

I ended up spending about 4 hours trying to fix a bug in the game when in actuality it was a future we didn’t need. If a bug is present move on and come back to it or find something fun in it. Now it isn’t a bug, it’s a feature.

• Don’t get yourself down.

Your game may not end up looking or playing as well as you had hoped, but that doesn’t matter. No pride, no shame. Submit what you have.

Game Jams are great experiences for those interested in Game Development. This was my first Game Jam but I plan to take part in more over time. Ludum Dare is a popular Jam that takes place online and is primarily for individuals. Global Game Jam was incredibly fun and I left with a deep feeling of accomplishment. I also recommend looking into the Cleveland Game Developers Group. They are very active on Facebook. Many of the people on this group take part in Global Game Jam every year and love working with each other.
The only way to truly understand a Game Jam is to take part in one. I can only talk about so much and I can only use my own experiences. Game Jams happen more than one would think, all you have to do is look. It’s a great challenge and is akin to playing sports with friends. Though exhausting, it’s primarily about having fun.