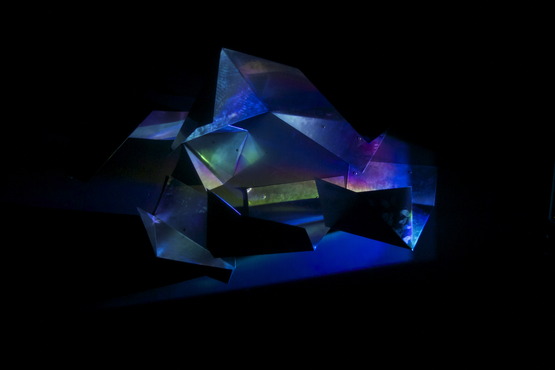 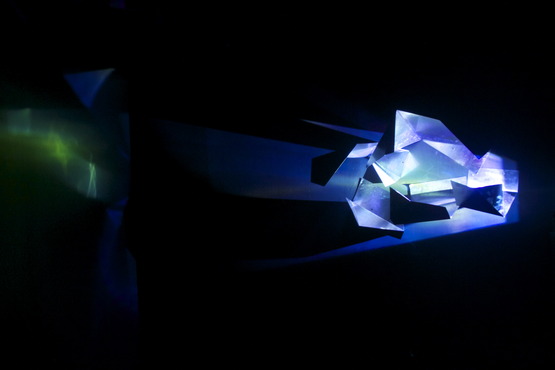 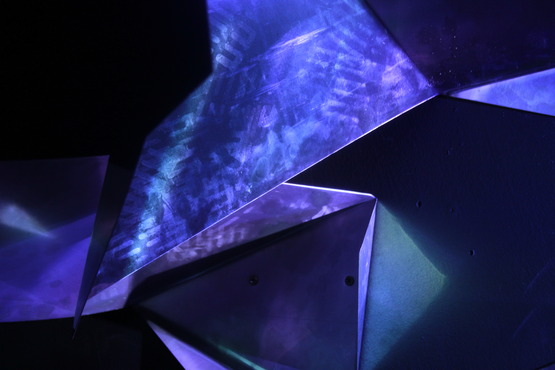 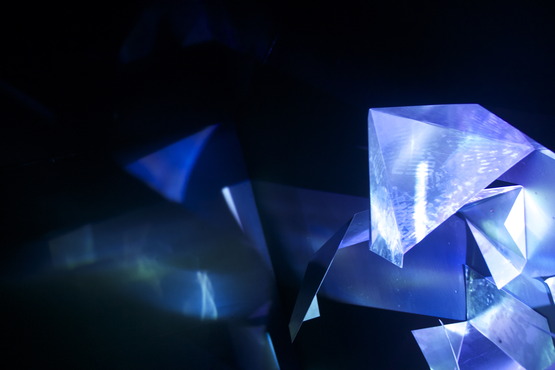 For my most recent work I decided to use steel as a way to distort video, using its reflective qualities to my advantage by projecting video through a steel sculpture. When the video hits the steel, the light bounces off of the surface and reflects around the room.

To make the sculpture, I took stainless steel and used the brake press in the woodshop to bend the steel into geometric shapes. When I was done, I had 5 geometric shapes of various sizes that I drilled two holes into. The holes were used to screw them into the wall. I decided to keep the 5 pieces separate so that I could play around with their shape on the wall. This also keeps my options open for any further installations of this piece along with making the piece easier to put into storage. Once the steel was screwed into the wall I started setting up the projector.

I checked out a projector and immediately started playing around with where I wanted to have it setup. I started out having it underneath my steel and projecting my video from the bottom of the steel. This didn’t work very well, it just ended up being a huge square of video on the ceiling and a little bit of video on my steel pieces. I decided to try it from the side of the steel, this worked out very well, the video projected through the steel like a tunnel, in one side and out the other. The video not only bounced off of the steel and projected all over the inside, it reflected light all around the room while the outside of the steel was mostly black from being in the dark. Now that I knew where I wanted to have the projector, I needed to figure out a professional way to have the projector setup. Instead of sitting it on a stool, I got a black pedestal that was close to the perfect height. I cut 7 pieces of scrap wood to the same length and painted them black. Once the paint dried I set up the scrap wood in a box shape, similar to how a log cabin is built. This was to make sure the cords to the projector could still reach the wall and my laptop. It also keeps the projector from falling down since I was going to be tilting it up while it was propped on it’s side. Once the projector was secure, I set my laptop on the floor and hid it with the pedestal so no one could see it.

My piece is about a traumatic experience I had, and it expresses my feelings about the event. I realized that yes that event has happened, there isn’t anything I can do about it now, and I was not in the wrong. I used the steel as material, because steel is heavy and it represents being weighed down. The video represents how the bad memories overlay in my mind. The contrast between the sharp cold steel and the soft video done in warm colors express my constant back and forth on how I feel about what happened. They come together and interact in a beautiful, bittersweet way.

When Painting senior Liane Engstrom enrolled at CIA, among her credentials was a four-year stint in the @USMC as a diesel mechanic. Now, her artwork is taking center stageâand gaining notice, just as it did in a @WaterlooArts exhibition in January. https://t.co/gL2fDm0ZBB