Blog . Still not sure what you can do with a digital canvas?

Still not sure what you can do with a digital canvas? 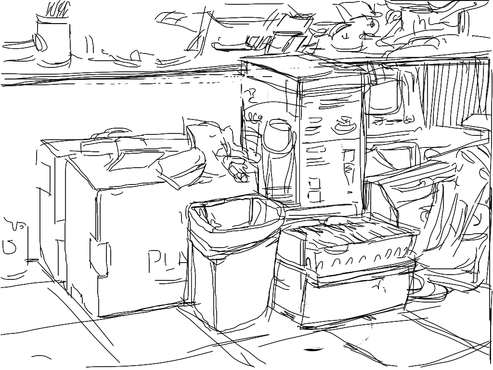 Foundation Professor Richard Fiorelli received his iPad at Tuesday's faculty session. Having worked at CIA for more than 25 years, Richard was a little apprehensive about this new technology. After spending a few minutes on the basics of using Brushes, Richard began to sketch on his iPad. Here is the first result of his efforts. This bears repeating. Richard had not touched an iPad prior to two days ago, and had never used Brushes before starting this drawing. Amazing.

Hi Greg, We totally agree, but Sketchbook Pro has a much steeper learning curve. We wanted to make sure students were given an app that allowed them to immediately be successful. Plus, we started with a contest to encourage students to jump right in. You can take a look, and "Like" the ones you like. The one with the most Likes will win an iTunes gift card. Http://digitalcanvas.posterous.com

I highly recommend Autodesk Sketchbook Pro for Ipad drawing....light years beyond Brushes and the other Ipad drawing apps....