Born on the edge of the Berkshire Mountains in Pittsfield, Massachusetts, Sarah Paul is now an artist based in Cleveland, Ohio. She received her BS in Mathematics from the University at Albany, and MFA in Visual Studies from the University at Buffalo, before swimming west along the southern coast of Lake Erie. After stopping to rest, mesmerized by the flaming smokestacks, she wandered inland and fell in love and lust with the smokestacks, the city, and the lake. Sarah is making work that embraces and celebrates this lush rusty belt. Recent and forthcoming exhibitions and performances include the Front Yard at Burchfield Penney Art Center, SPACES Gallery, Sculpture Center Cleveland, MOCA Cleveland, Albright-Knox Gallery, UB Art Gallery, and the Newhouse Center for Contemporary Art; her video work has been screened around the U.S. and abroad. In 2013, Sarah was generously supported by a Creative Workforce Fellowship granted from Cuyahoga Arts and Culture in Cleveland, Ohio. Sarah is presently an Associate Professor and Co-Chair of Sculpture + Expanded Media at the Cleveland Institute of Art.

Jessica grew up in Akron, Ohio and moved to Cleveland in 2011 after receiving a BFA in Studio Art from New York University in 2006 and an MFA in painting from Boston University in 2009. She was hired as the Technical Specialist in Fiber + Material Studies and began teaching in the Foundation Department. In collaboration with CIA, Jessica helped to relocate weaving equipment from the fiber department to open up a nonprofit textile studio in the Waterloo Arts District of East Cleveland. Jessica is currently a practicing artist and the Executive Director of Praxis Fiber Workshop.

Smoker graduated with a BFA from the Cleveland Institute of Art in 2011, and earned an MFA in Sculpture from Washington University, St. Louis in 2013. 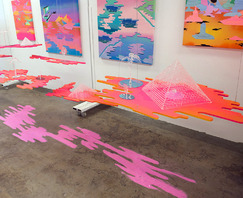