Maggie is an Associate Professor and Printmaking Department Chair. She is a founding member and Board President of the Morgan Conservatory, a center for book and paper arts. http://morganconservatory.org

Kat Burdine was born in St.Paul, Minnesota. As an artist, she sabotages modes of making to produce failed prints, and objects—investigating the consequences of socially assigned narratives and the ways we carry them. She has participated in residencies such as Talking Dolls in Detroit, and collaborated internationally on various social and visual projects. She holds an MFA in Print Media from Cranbrook Academy of Art (‘15).

Aimee Lee is an artist, papermaker, writer, and the leading hanji researcher and practitioner in North America. Her Fulbright research on Korean paper led to her award-winning book Hanji Unfurled (The Legacy Press) and the first US hanji studio in Cleveland. Her artists' books are in the library collections of the Brooklyn Museum of Art, Metropolitan Museum of Art, Museum of Modern Art, Bainbridge Island Museum of Art, Stanford University, UCLA, and Yale University. She has shown at the Fuller Craft Museum, Robert C. Williams Museum of Papermaking, Korean Cultural Service (NYC) and Korean Cultural Center (D.C.). Her work has appeared in The Korea Times, The New York Times, The Plain Dealer, KBS World Radio, PBS, VOA, and CNN’s Great Big Story.

Jessica grew up in Akron, Ohio and moved to Cleveland in 2011 after receiving a BFA in Studio Art from New York University in 2006 and an MFA in painting from Boston University in 2009. She was hired as the Technical Specialist in Fiber and Material Studies Department and began teaching adjunct classes in the Foundation Department. In Collaboration with CIA, Jessica helped to relocate weaving equipment from the fiber department and open up a nonprofit textile studio in the Waterloo Arts District of East Cleveland. Jessica is currently a practicing artist and the Executive Director of Praxis Fiber Workshop.

Stevie Lee Tanner is a visual artist based in Cleveland, Ohio. She received her BFA in both Painting & Drawing and Printmaking from The University of Akron in 2014, and received her MFA in Printmaking from the University of Delaware in 2016. Tanner has exhibited in the US and abroad, including shows at The Fleisher Center for Works on Paper (Philadelphia, PA), The Delaware Center For Contemporary Art (Wilmington, DE), and Kunstraum Tapir (Berlin, Germany). She has taught introductory and advanced printmaking at the University of Delaware. She is the Technical Specialist & Shop Manager in CIA's Printmaking department. 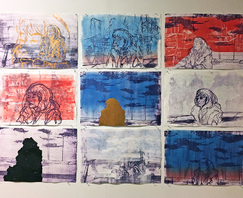