Suzanne is the author and illustrator of the picture book My Bear Griz, a White Raven Winner of 2012. She currently works as a children’s book illustrator and as faculty member for the Illustration Department, Pre-College Program, and adult Continuing Education programs at the Cleveland Institute of Art. She is passionate about the growing field of Picture Book illustration and the multi-dispiliary approach of creating sequential art.

Robert Roth is a native of Cold Spring Harbor, NY. A graduate of Rhode Island School of Design, one of Robert’s first painting projects was with The Grammy Awards featured in The New York Times. This lead to his first exhibition “Jazz Arrangements” in Manhattan’s lower east side. This followed with exhibitions at The Heckcher Museum of Art and Bologna Landi Gallery in East Hampton, NY. His later works were shown alongside his heroes, Richard Diebenkorn, Edward Hopper, Frank Stella and Romare Bearden at the “American Collage Exhibition”, Gerald Peters Gallery, NYC. During his 35 year career, Robert has contributed works to a variety of clients including, Apple, American Express, The Ritz Carlton, United Airlines, RCA Records, The New Yorker, The Boston Globe, Conte Nast , The Hyatt Regency, Columbia, Northeastern, and Rhode Island School of Design. He has received awards from The National Endowment for the Arts, The Cleveland Museum of Art, The Heckcher Museum of Art, SI Museum, Communication Arts, Print Magazine, and The New York Times.

Robert’s paintings are represented by Dimmitt Contemporary Arts in Houston and Gerald Peters Gallery in Santa Fe and are held in collections in the US and abroad. He lives with his wife, Cheryl Roth (RISD grad) in their 1850 farmhouse in Northeast, Ohio and summers on the island of Martha’s Vineyard.

Kelsey Cretcher is a 2012 Illustration graduate from the Cleveland Institute of Art. She currently works as a freelance illustrator and sells original illustrations and merchandise, allowing her to focus on her own unique illustrations and growing following while also freelancing and bringing clients ideas to life

Her specialty is in vector illustration and design. Her game illustrations are featured on BoardGameArena.com and Tabletopia.com.

After graduating with a BFA degree from Cleveland Institute of Art in 1986, James Groman was hired by American Greetings Entertainment and Toy Concept Division: ‘Those Characters from Cleveland,’ where he worked on the development of brands like Care Bears, Popples, Madballs, Blurp Balls, My Pet Monster, and Ring Raiders. He also conceived and designed the toy line: Barnyard Commandoes for Playmates Toys.

James worked for four years at Hasbro Toys Playskool group on their GoBots/Transformers, Major Powers and Cool Crew brands. While being design lead on the Star Wars Jedi Force toys James had the opportunity to travel to San Francisco and work with the folks at Lucasfilm on the development and design of the line.

Back at American Greetings Properties, James worked on brands like Care Bears, Strawberry Shortcake and Madballs as well as new ventures like Sushi Pack and Tinpo for CBS, Twisted Whiskers, Maryoku Yummy for The Hub Network, Packages from Planet X for Disney XD. He is the Art Director for the Care Bears Hub animated series, as well as the new, Netflix series: Care Bears; Meet the Cousins. He also created the villains for the series, Beastly and the Beasties.

James had the honor of traveling to New Zealand to work with Richard Taylor and the team at Weta Workshop for a week on the film: The Hobbit: An Unexpected Journey.

When not teaching at CIA, James operates his own entertainment and toy design studio creating products for companies all over the planet. His partnership with the Japanese company Instinctoys on the King Korpse Vinyl Figure led to a Designer Toy Award for Toy of the Year in 2017.

James has most recently collaborated with DC Comics Collectables on a series of Batman figures and MGA Entertainment on Crate Creatures and Kingdom Builders toy lines. 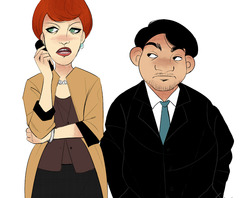