Harrison Walsh has been a member of the Cleveland Institute of Art's Game Design Department since 2013. He graduated from CIA with a BFA in T.I.M.E.–Digital Arts in 2009 and began instructing students in game design and digital arts in 2010. Outside of CIA Harrison also does freelance 3D modeling, game design, graphic design, and film work. Recently, Walsh worked on the motion picture Draft Day.

Steven Rawley is a character animation freelancer. He has worked on several projects during his time at CIA, like CareBears: Care Package Chronicles for American Greetings, Dog Eat Dog by Paul Schrader, and several animation projects for other clients through the school. Shortly after graduation Steven had worked as an Animator and Graphic Designer with 360 Alley, an augmented reality production studio, and at Skynamic Studio on its independent product called TrueTail. Currently he works full time as Department Assistant, Technical Specialist, and Adjunct Professor at the Cleveland Institute of Art.

Jared Bendis is an artist and teacher from Cleveland, Ohio who specializes in game design, virtual reality, photography, and interactive & new media. He received his MFA in Contemporary Dance at CWRU with a focus in Performance Media, his MA in Art Education from the CWRU and CIA joint program, and his BA from CWRU in Psychology with minors in Music and Art Studio.

Prior to becoming Chair in 2021, Jared had served as adjunct in Game Design at CIA since 2006 and has held adjunct appointments at CWRU in Cognitive Science, Art Studio, and SAGES. He has worked at CWRU since 1994, and continues to serve as the Creative New Media Officer for the Kelvin Smith Library.

Jared’s art practice includes creating immersive installations that provide interactive social and sensory experiences. As a photographer he prefers to view the world, especially castles, though a wide-angle lens and specializes in spherical panoramic and stereoscopic photography. He also has extensive experience digitizing collections in museums all over the world.

Jared is also an installation artist, photographer, teacher, playwright and filmmaker. As a visual artist Jared focuses on the way people see, augmenting their reality via technology and visual perception. As a photographer he prefers to view the world though a wide-angle lens and specializes in spherical panoramic and stereoscopic photography. On his first trip overseas, in March 2000, Jared visited the Chateau de Pierrefonds in France and became driven (if not obsessed) with capturing and sharing cultural and architectural experiences and has photographed over 500 architectural, archeological and cultural sites (primarily castles) in 14 countries. Jared’s art practice also includes creating immersive installations that provide interactive social and sensory experiences for viewers.

Jared has extensive experience in the Museum world digitizing collection materials from: The Cleveland Museum of Art (where he served as their Virtual Reality Specialist), The Cleveland Botanical Garden, The Western Reserve Historical Society, The Cleveland Natural History Museum, The Cleveland Zoo, The musée des beaux-arts Dijon (in coordination with the French Regional American Museum Exchange), and the Isparta Museum in Turkey.

Anthony (Tony), with fellow CIA alumni, started Photonic Studio in 2012. Tony is a multi-faceted artist with a background in illustration, design, and interactive development.

Always exploring, he keeps students up to date on new software, apps and interactive solutions. His years of experience running a business lends industry insight to students as they enter the work world.

Robert Lauer completed his BFA in game design at the Cleveland Institute of Art. He has freelanced for companies like Bio Enterprise and Halo Media Works and taught animation courses to high school students through the Center for Arts Inspired Learning. Robert has a passion for teaching, and frequently conducts game design workshops and lectures on the history of game design.

Lauer continues to teach through CAL and currently works as the Creative Director for 360 Alley; an Augmented Reality design company.

Outside of his work as a director, Robert works diligently to grow the game development community, serving as an organizer with the Cleveland Game Developers. He has had his independent work exhibited at various venues including the Akron Art Museum, GDEX, and the Cleveland Maker Faire. 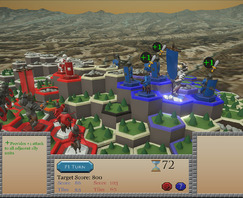