Scott Ligon is an award-winning digital artist and filmmaker. He is the coordinator for the digital foundation curriculum at the Cleveland Institute of Art.

He received his MFA from the Maryland Institute College of Art where he studied under renowned original abstract expressionist Grace Hartigan and attended “Perspectives on Criticism” classes taught by Robert Storr, formerly senior curator of painting and sculpture at New York’s Museum of Modern Art.

Early in his career, Scott made a living as a graphic designer and illustrator for ad agencies around the Washington DC area. This enabled Scott to learn digital art software. Scott utilized his perspective as a painter to explore the expansive possibilities of digital technology as an art- making tool.

Scott is the author of Digital Art Revolution, Creating Fine Art with Photoshop. The book was published in March 2010 by Watson-Guptill, a division of Random House, the premiere publisher in books. The book is currently in its second printing and an eBook version was released in July 2011, available for Kindle, Nook, iPad and other eBook formats.

His award-winning animated short film, Escape Velocity, about the connection between ADHD and creativity, has played in festivals and theaters all over the world. Escape Velocity plays regularly on the Documentary Channel in the USA and Shorts TV in Europe. The film recently signed a third television deal with LAPTV, a partnership of four major entertainment giants, 20th Century Fox, MGM, Paramount, and Fox TV in Latin America. The film is distributed by Shorts International, the world’s leading short film brand.

He has recently completed his second short film, Figure/Ground about the death of his father. It features veteran actor Allan Kulakow who has been in several movies, including Death by Dawn, Syriana, The Good Shepherd, and HBO’s Something the Lord Made. He appeared as the Joint Chief of Staff on NBC’s West Wing. Figure/Ground is currently making a film festival tour and was recently signed to an exclusive distribution agreement with Future Shorts in London. Future Shorts is a short film distributor whose partners include HBO and Sony Computer Entertainment.

Scott is currently working on his first feature film, a documentary about creativity called The Big Picture.

Christian Wulffen has been an Associate Professor since 2003.

I am concerned with how artists achieve knowledge and how they structure knowledge. This intersects with my concern as a teacher and artist, to encourage participants to reflect on the processes that an artist goes through--for example, an intuitive creative thinking process, intentional purposeful engagement, and adherence to a model or system.

To convey this notion of action as a mode of knowledge production, I use specific symbols for my work, one of these: boards that are pre-manufactured with three vertical slots and one horizontal slot (plywood).

From the viewer’s perspective, the board has the option to hold various information. From my perspective, I see this as a concept to display information to exercise the different links in its display from one board to another. My environment is a grid—one of the hallmarks of modernist abstraction and capable, as a visual symbol, of signifying a whole system of art production and thought. This idea is depends on the perspective of the viewer and how that viewer is situated in a distributed network of production and reception of the information about this subject.

Crucially for me, the painting, the paper, and the board (as in my recent production), simulate the portability of information. I am interested in its mobility as a sign in which sender and recipient receive the same information but decode it differently depending on their respective environments.

Terry J. Clark II earned his MFA in Painting from Kent State University in 2004 and his BFA from the Cleveland Institute of Art in 2002. Terry’s artworks have been featured at the Cleveland Museum of Art, Ingenuity Festival, Asterisk Gallery, and CSU Art Gallery. Terry has taught 2D and 3D design at Cleveland State University and drawing at CIA. Terry paints with acrylic and watercolor paints and makes sculpture from found objects. His subject matter inspiration comes from Earth Sciences and observing the natural world. The concepts of natural light, optics, and color are recurring themes found in his artworks.

Scott Goss is a multi-media artist whose work explores his relationship to time, memory, and place. Scott’s work explores these concepts through a variety of media including glass, video, sculpture, and installation. Scott received his BFA from the Cleveland Institute of Art in 2006 and his MFA from Kent State University in 2014. His work has been featured in solo and group shows nationally, including ROY G BIV Gallery in Columbus, SPACES Gallery in Cleveland, Minan Gallery in Los Angeles, First Street Gallery in New York City and Verge Art Fair in Brooklyn. His work and research has been supported through grants by the Ohio Arts Council, Harpo Foundation, and Kent State University.

Amber Kempthorn explores memory and cultural mythology through drawing and collage. Her work is exhibited regionally and nationally. She is a graduate of Hiram College, the Maryland Institute College of Art and the Cranbrook Academy of Art, where she received her MFA in Sculpture in 2008. Amber has been an adjunct member of the faculty at the Cleveland Institute of Art and the College of Wooster since 2011. 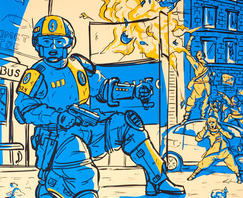