Courses  Charette: Self + Other Voices | Design I | Design II

Petra Soesemann is a Professor and Chair of the Foundation Environment. In 2009 she was granted a year-long sabbatical leave to focus on her creative practice at the Roswell Artist-in-Residence Program. Selected awards include Artist-in-Residence at the Fundacion Valparaiso in Spain; Fulbright Fellowship to study Incan architecture in Peru; exhibition Grant to Sao Paulo, Brazil; travel grants to Mexico, Honduras and Guatemala to research Mayan art and architecture; and travel grants to Turkey to study Islamic art and architecture as well as contemporary art. She has also taken CIA students to Mexico, Germany and Italy on team-taught foreign study trips. Soesemann’s recent work explores the conventional relationships between seeing and representing; her fabric constructions often manipulate light and color to bring perception into conflict with uncertainty, engaging the basic mechanisms of “mind seeking meaning” as a process of consciousness.

Tina Cassara received a BA in urban studies, emphasis in sociology from Barnard College, Columbia University. Following graduation, she moved to Viques, in the Juan region of Peru, and studied with Francisca Mayer from Black Mountain College, teaching natural dyes derived from indigenous plants to local weavers. Her travels continued through the Collao Altiplano region of Bolivia. While living in New York City, Cassara was co-editor of Sing Out! magazine before attending Cranbrook Academy of Art, where she received an MFA from the fiber department. Cassara has since conducted extensive research into women’s labor in the American textile industry, issues of European migration and relocation, and more recently, the assigned value of labor in historically women-dominated textile industries in the South. In the late 1990s, Cassara began exploring the history of textile production. A strong advocate for organized labor, she began conducting interviews in LaGrange, GA, and nearby mill towns, speaking with retired textile workers, factory owners, surviving union organizers, and members of textile heritage societies. In 2008–09, Cassara was awarded a sabbatical to further her research in the network of textile heritage societies, including travel to Cooleemee, NC, working with organizers of the Textile Heritage Initiative and members of the Troop County Historical Society. Cassara's research also continues in Scranton, PA, where she is examining documents and photographs related to the growth of the mining and silk textile industries

Nicole Condon is an interdisciplinary artist and assistant professor in the Foundation Department at CIA. Her practice intersects art and science, and examines the dichotomy between the microscopic and macroscopic in biological systems, cultural and urban networks. Her work has been shown internationally in Hong Kong at the Bi-City Biennale, in Beijing at the B3 Biennale, and in the Reverse the Perspective exhibition at the Xiangsi Art Museum.


Maggie is an Associate Professor and Printmaking Department Chair. She is a founding member and Board President of the Morgan Conservatory, a center for book and paper arts. http://morganconservatory.org

Anthony Ingrisano is an instructor in CIA's Painting and Foundation departments. Ingrisano shows with Lesley Heller Workspace in New York. Before he started at CIA, he taught at Briarcliffe College. He was a contributing essayist to Sharon Louden’s book, Living and Sustaining a Creative Life. He earned an MFA from Pratt Institute.

Kautenburger's sculpture functions to contain sensations of the natural environment, housing and presenting natural phenomena as an invitation for anyone so inclined to poetic ponderance. Work often involves insect habitats (crickets and honeybees), natural material from the Rocky River basin, as well as substances collected from his bee yard, such as propolis, wax, and pollens.

He has been teaching at CIA since 2001, where he teaches Foundation Design and Environment, Art and Engaged Practice.

Kuehnle has had solo shows at museums, galleries and universities in the United States and internationally.

In 2019 he opened a solo show, Wow, Pop, Bliss, at the Columbia Museum of Art in Columbia, SC that will span 4 interior galleries and include a monumental site-specific inflatable sculpture on the museum’s exterior.

He exhibited a site-specific interactive inflatable installation at Exploratorium Museum in San Francisco in 2018. His 2016 solo exhibition at the Hudson River Museum in Yonkers, New York was favorably reviewed in The New York Times, featured in New York Magazine’s “Approval Matrix” and recommended by online sites such as the New York Daily News, Artnet and Hyperallergic. In 2016, Kuehnle received a Creative Workforce Fellowship, a program of the Community Partnership for Arts and Culture funded by the citizens of Cuyahoga County. In the fall of 2016, Kuehnle exhibited new monumentally scaled site-specific inflatables at the Akron Art Museum in an exhibit titled, Wiggle, Giggle, Jiggle. This installation was reviewed in the Plain Dealer, Akron Beacon Journal, Canvas Magazine, CAN Journal, WCPN’s the Sound of Applause. In 2014, he was selected for the national survey exhibition State of the Art: Discovering American Art Now at the Crystal Bridges Museum of American Art. As a Fulbright Graduate Research Fellow in Japan, 2008, he pursued his interest in public art and sculpture.

Focusing on sculpture and performance, Kuehnle works in various media and has exhibited his projects nationally and internationally. His recent work features site-specific inflatable installations in museums as well as public performance treks through rural and urban cities in the U.S. such as Chicago, Detroit, Austin, St. Louis, Cincinnati, San Antonio, Dallas, and New York as well as international performances in Japan, Italy, and Finland. 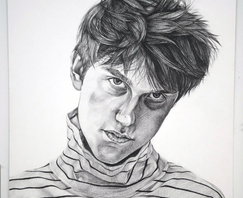