CIA’s year-long Community Works series includes exhibitions designed to provoke thought and highlight social and cultural issues. During the fall 2014 semester, CIA presented five international artists in Community Works: Artist as Social Agent. Spring semester 2015 brings a major exhibition in the Reinberger Galleries, Women to Watch - Ohio, which was initiated in partnership with the Ohio Advisory Group of the National Museum of Women in the Arts. 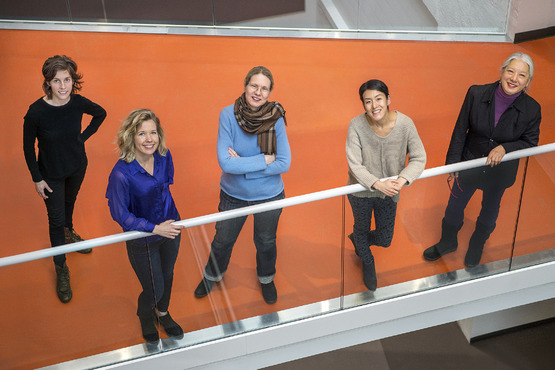 Through a unique collaboration with the Ohio Advisory Group of National Museum of Women in the Arts (NMWA), CIA shines a spotlight on accomplished women artists with Women to Watch—Ohio. This exhibition, the last major show in CIA’s current Reinberger Galleries, will feature artworks by five women artists from Northeast Ohio who work in a variety of media including ceramics, tapestry, painting and drawing, photography, installation, and mixed media.

All of the artists are nominees for the international Women to Watch exhibition in Washington, D.C., which opens on June 4, 2015 at NMWA. (Click here to read  more about this international exhibition.) Women to Watch - Ohio includes CIA graduates Christi Birchfield (Class of 2006) and Lauren Yeager (Class of 2009), plus Hildur Ásgeirsdóttir Jónsson, Mimi Kato, and Eva Kwong.

Read more about the exhibition and the influential women who initiated it here. Read about the artists here.

Women to Watch - Ohio opens to the public with a reception in the Reinberger Galleries on Thursday, April 2, from 6-8 pm. As part of CIA's Lunch On Fridays series, the featured artists will participate in a public panel discussion on women in the arts on Friday, April 10, 2015, at 12:15pm in Aitken Auditorium in the Gund Building.

The Ohio Advisory Group of NMWA and Cleveland Institute of Art gratefully acknowledge sponsorship for Women to Watch - Ohio by Huntington Bank and media partner, ideastream, the non-profit organization that includes WVIZ/PBS, 90.3 WCPN, and WCLV 104.9. Additional funding was provided by the Ruby Shoes Fund of the Jewish Federation of Cleveland.

Reinberger Galleries named one of the top 10 galleries in Cleveland

Reinberger Galleries named one of the top 10 galleries in Cleveland

CIA's Reinberger Galleries has made The Culture Trip's list of the 10 best art galleries in Cleveland.

View photos from the exhibition here.