While my passions for design and technology co-exist, the journey to the final product is what motivates me. The relationship between a creative idea and the tools or techniques needed to bring it to life is a challenge I look forward to facing on a daily basis.

Zachary Owens is a CIA alum and received his Animation BFA in 2018. Zach is versatile with a background in Illustration, Animation, and 3D modeling. Just as new applications, software, and workflows are being introduced he makes sure to stay up to date, exploring the latest and the unknown.

David Schwartz is a professional storyteller, having mastered the craft since he could speak a word or hold a pencil. Once he figured out what to do with words and pencils AND get paid, his destiny was set.

Though having established careers in comic books and magazine illustration, and as a radio/TV broadcaster, Dave moved to LA in 1987 and began his career in animation. He started out as a storyboard artist at Disney, Warner Brothers and Klasky-Csupo working on such projects as the Disney Afternoon shows, Tiny Toons, Taz-mania, Pinky and the Brain, The Simpsons and Rugrats. At Disney, Dave moved into writing and directing episodes for Bonkers and The Little Mermaid and became Art Director for Disney TV Development, designing characters for the series, Gargoyles, and creating the animated series, The Mighty Ducks. Dave went on to directing shows at Sony, D.I.C., Film Roman and Dreamworks and storyboarding/writing episodes for Johnny Bravo at Cartoon Network.

As a freelancer, Dave has storyboarded on The X-men, Batman: Brave and the Bold, Robot Chicken and Dorothy and the Wizard of Oz, among hundreds of others.

As an educator, Dave has taught in the animation departments of Santa Monica College, Woodbury University and CSUN- Northridge, all in Los Angeles, California. He currently teaches Storyboards for Animation and Illustration, Concept Design and figure drawing courses at the Cleveland Institute of Art.

He continues to do concept design and storyboards for film and TV projects, post editorial cartoons on the internet and is a member of the Northern Ohio Illustrators Society and the National Cartoonists Society.

Lisa Tan developed a love for the 3D animation pipeline and has applied modeling, texture mapping, rigging and animation skills to 3D animatics for theme park design at Universal Creative, holographic anatomy for the School of Medicine at Case Western Reserve University, and previsualization footage for Paul Schraeder's film Dog Eat Dog. She has created two short films: Wisteria, a collaborative animation that premiered on a planetarium dome at the Cleveland Museum of Natural History, and High Hedges, her thesis film which was on exhibit at the Cleveland Institute of Art's 2017 Student Summer Show. Lisa currently works as a freelance designer and multimedia artist and spends her free time learning and teaching creative skills, participating in local community organizing, and building cat trees.
Lisa graduated in 2017 from the Cleveland Institute of Art with a BFA in Animation.
expand collapse
Prev
1 2
Next 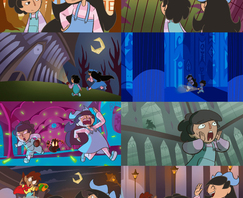