Anthony Scalmato has created more than 100 published works which have been viewed on television, web and mobile devices. Before joining CIA, Scalmato worked as a Senior Creative Developer at American Greetings where he provided animations, illustrations and art direction for products that are viewed globally by millions of people every month. He created the very first animated greeting card for Taylor Swift and worked on custom greetings and designs for clients such as Applebee’s, Disney, Pixar, Sony, UPS, Taylor Swift, Walmart, M&M’s, Ferraro Chocolates and many other Fortune 500 companies.

In 2011 Scalmato was awarded the American Greetings Chairman’s Award for Creativity and Innovation. He has also received over a dozen “Best Animation” awards from film festivals around the world.

In 2016 Scalmato oversaw the creative production for the web series Care Package Chronicles featuring the Care Bears. This short comedy series follows the Care Bears in their toy forms as they travel in a “care package” to deliver caring and good will to all they visit. Production was done at the Cleveland Institute of Art in collaboration with American Greetings.

In addition to teaching, Anthony oversees the productions in the Animation Community Projects course at CIA where students and employers collaborate on projects. These partnerships and projects are vital to a student’s education as they get firsthand experience working with clients and partners on a shared vision while applying the research and skills learned in the classroom to real-world projects. Clients have included: American Greetings, Pro Football Hall of Fame, Disney Home Entertainment, Cleveland Museum of Natural History, Twin Sisters Media and Deck of Dice to name a few.

Anthony continues to work as a freelance artist and contractor for studios while continuing his work with American Greetings on their digital brands.

Lincoln Adams has worked for 20 years as an illustrator, storyboard artist and designer. His projects have included magazines, television shows, character design, book covers, and greeting cards and was selected to the 47th Annual Society of Illustrators West Show in Los Angeles.

Lincoln moves fluidly back and forth between traditional, tactile mediums and digital mediums to execute ideas— often times incorporating both within a piece. A firm believer that the traditional informs the digital, he continues training and experimenting in both. Lincoln's primary tactile mediums include oils, wax crayon and colored pencil, and monoprints. His digital expertise includes the use of the Cintiq via Photoshop and InDesign, and Storyboard Pro.

However, even with all of the various approaches to technique and execution, one thing stands out as the most vital component in Lincoln's work— Story. And it is what is what he espouses in all of the courses he teaches as the chief ingredient toward success in the entertainment art world.

To learn more about Lincoln read his interview at Animation Insider!
http://www.animationinsider.com//?s=lincoln+adams
http://www.imdb.com/name/nm8555511/

Hal Lewis studied painting and illustration at the School of Visual Arts in New York and finished his BFA in painting at Long Island University.

"Early in my career I designed imprinted graphics for children’s wear and men’s sportswear at a variety of clothing companies in New York.

I went on to work at a small computer software company developing and selling 2D and 3D design software for about seven years, before jumping to one of our customers –Dreamquest Images in California.

Dreamquest Images had recently been bought by the Walt Disney Company so, after working on several live action pictures there including George of the Jungle, Gone in Sixty Seconds and Mighty Joe Young, I moved over to Disney Feature Animation in Burbank, California.

At Disney Feature Animation, I worked on three animated feature films—Chicken Little, Meet the Robinsons and Bolt; creating the CG characters. During my stay there I also worked on two animated 3-D “ride films” for the Disney theme parks in Orlando and Tokyo- the Magic Lamp and Mickey’s Phiharmagic.

I worked at Sony Imageworks where I helped on the completion of the Animated Feature film Arthur Christmas.

I was then hired by Digital Domain and moved to Florida, to help build an animation studio there. Our first picture was scheduled to be The Legend of Tembo-- I was the character model lead on this film. To this date, the film has yet to be completed.

Recently I have been doing freelance work for the Disney Consumer Products division; helping to create new Marvel Comics based toys and action figures."

Jeff Simonetta began his path into animation by attending Bowling Green State University. While attending Jeff was active as the chair of the BGSU ACM SIGGRAPH Student chapter for two years and worked to restore the digital arts community at BGSU. In 2011 he received a BFA in Digital Arts specializing in Animation.

After graduation he completed animation workshops through ianimate.net, studying with some of the best animators in the industry to further refine his craft. From here was part form Photonic Studios, a CGI visualization firm in Cleveland.

Jeff continues to help build his community with teaching and collaboration. He loves animation of all sorts abd has become a master of his craft. He wishes to spread his passion to new generations of animators.

Steven Rawley is a character animation freelancer. He has worked on several projects during his time at CIA, like CareBears: Care Package Chronicles for American Greetings, Dog Eat Dog by Paul Schrader, and several animation projects for other clients through the school. Shortly after graduation Steven had worked as an Animator and Graphic Designer with 360 Alley, an augmented reality production studio, and at Skynamic Studio on its independent product called TrueTail. Currently he works full time as Department Assistant, Technical Specialist, and Adjunct Professor at the Cleveland Institute of Art.

Owner of mb2media, Matt has more than 25 years of experience in the creation and creative direction of visual media for the medical, pharma, and tech industries. He has done work for many companies, including Sanofi-Aventis, Novartis, Bristol-Myers Squibb, Alcon, Medtronic, Kaiser Permanente, Pfizer, Genentech, Amgen, Boston Scientific, Temple University, and Thomas Jefferson University. He received a Master of Fine Arts degree in medical illustration from the Rochester Institute of Technology, and a bachelor’s degree in biology with a concentration in fine art from Muhlenberg College in Pennsylvania. He is a Certified Medical Illustrator and a longstanding member of the Association of Medical Illustrators.

Sheila has a B.A. in Speech Communications and Theatre from the University of Michigan and an M.A. in Theatre (Acting Focus) from Purdue University. In the mid-80s, she returned to college to earn her teaching certification in Speech and Drama for students in seventh through twelfth grades.

For twenty years following the receipt of her Master’s Degree, Sheila pursued a career in the professional theatre, performing in such local professional venues as The Cleveland Play House, Great Lakes Theatre Festival, Cain Park and Fairmount Theatre of the Deaf. Throughout this time, she also earned her living doing hundreds of voiceovers for television and radio, and, on television, appeared in several episodes of CLARISSA EXPLAINS IT ALL and NICKARCADE for Nickelodeon, along with an episode of UNSOLVED MYSTERIES and national television commercials. She is also the voice on over twenty toys for the company, JUST FOR LAUGHS. In the mid-80s, she was a founding member of Cleveland’s GIANT PORTIONS IMPROVISATIONAL COMEDY COMPANY, from which she was recruited by Walt Disney World in Orlando to launch their new improv house, THE COMEDY WAREHOUSE, and for whom she worked for three years. While in Orlando, she also worked as a performer for Universal Studios, before returning to Cleveland to continue her professional stage career.

In addition to continuing her professional acting career, she landed teaching positions at Second City Cleveland, Baldwin-Wallace University and Beachwood High School, at which she taught Public Speaking, Improvisational Comedy for Performance and was Director of Theatre for 20 years, directing over 40 theatrical productions and establishing The BHS Bellylaughers’ Society, a student improv group, which performed monthly at the high school. While at Beachwood, Sheila was also Faculty Advisor and Head Writer for a student-directed and produced 90-minute feature film, FROM THE HOLOCAUST TO FREEDOM: A Journey to Cleveland, which was accepted into the Mandel JCC Annual Film Festival for a public screening at the Cedar Lee Theater. She also has been a guest lecturer at Kent State University, Baldwin-Wallace University and CIA.

Margaret W. Li, a visual artist who specializes in illustration. I devoted my time to creating art with any artistic style or medium that caught my interest.

As I was completin my BFA in Video Game Design at the Cleveland Institute of Art, I continued my freelance career and co-founded Digital Morphnie Games in 2015. To make myself more technologically adaptable, I received front-end web design education and received online marketing experience.

By blending my artistic and technical skills, I’ve been able to take on various roles and tasks. I created game concepts/assets, logos and emotes, animations, marketing materials and album covers. With the time I have left, I provide drawing lessons for young students and work on personal animation projects. 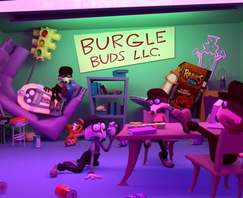